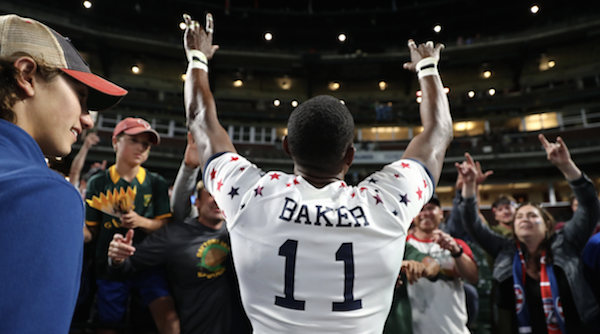 At a star-studded affair in France, the Eagles Sevens’ star was honored after voting and nominations from his peers made an easy selection for the award.

Despite battling injury through much of the 2018 World Series, Baker still managed to cap off a brilliant year.

After earning his first World Rugby Sevens Player of the Year honor in 2017, the athlete crossed the tryline 37 times in a total of 30 matches during the 2018 season.

In the earlier part of the year, Baker’s breakout performances allowed him to become the USA’s all-time leading try scorer — passing fellow 2016 Olympian Zack Test — and helping the United States transform into a powerful threat on the rugby pitch.

During the Men’s Eagles Sevens’ home stop in Las Vegas, Baker helped his side win their first ever World Series gold medal on U.S. soil with a tactful tackle and cracking try that allowed the USA to defeat Fiji in the Cup Semifinals.

The try put Baker atop ESPN Sportscenter’s Top 10 and is considered one of the best ever scored in rugby sevens.

Baker expressed his enthusiasm for winning the award for a second year in a row, and how the honor comes with the great company of fellow-nominees Jerry Tuwai (Fiji) and Ben O’Donnell (Australia).

“It’s hard to explain the excitement and how honored I am just to be mentioned as a nominee alongside the other two great guys,” said Baker.

“I’m truly blessed and thankful for my teammates and staff, as well as all the great fans and players who make the game we play so respectable and exciting. Cheers for the opportunity.”

A proven and respected competitor, Baker personifies rugby sevens with his fast feet and well-rounded play.

“We are all very pleased and proud of Perry to be recognized again as World Player of the Year. It is a great honor and testament to his playing ability,” said Head Coach Mike Friday, describing how the coveted award is a fitting nomination for the athlete’s impact on the sport.

As the World Rugby Awards in Monaco see the highlights of another season rewarded, the USA Men’s and Women’s Eagles Sevens embark on the next stop of the HSBC World Rugby Sevens Series 2019.

Fans anxious to see Baker open a new season should tune into the Emirates Airline Dubai Sevens where the athlete will once again be available for selection.

Stay tuned to your league officials at Rugby NorCal.