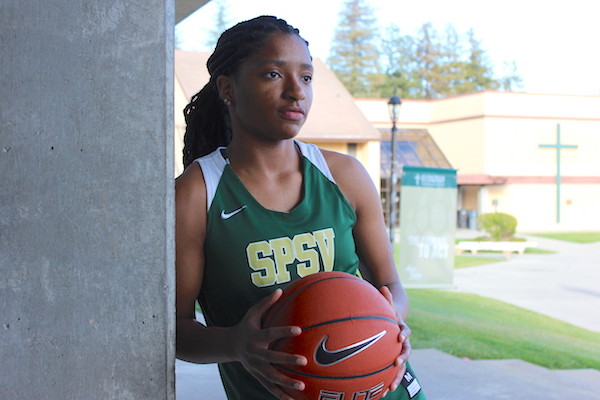 It was just two days later. It seemed too soon for Tameiya Sadler.

Shock still reverberated in the aftermath of the helicopter crash of Los Angeles Lakers legend Kobe Bryant, which killed the NBA great, his 13-year-old daughter Gianna, and seven others en route to a travel basketball event.

Much like hundreds of thousands of high school basketball players around the nation did on Jan. 29, Tameiya Sadler and her St. Patrick-St. Vincent-Vallejo teammates got back on the court, hosting St. Mary’s-Berkeley.

Each player and fan has their own story about how the tragedy felt to them. For Sadler, it was the sudden death of a superstar athlete she had patterned her style on. The tragedy was magnified because the Bruins team was in the Los Angeles area, having played Heritage Christian-Northridge the day before, when the news broke of the fatal crash in nearby Calabasas.

“It was really hard hearing about Kobe, especially because Kobe was one of my favorite players. I really modeled my game around him,” said Sadler, who learned of the tragedy on social media while eating a team meal at Roscoe’s in nearby West Hollywood.

“It was like we all just froze. It just can’t be true. Kobe is invincible. He can’t … “

The Bruins and Panthers tried to focus on the Tri-County Athletic League Rock Division game at hand, which St. Mary’s won 60-52, though the Bruins made a spirited comeback to make it 56-52 with 1:09 left.

“Our kids, they grew up in the Kobe era,” St. Patrick coach Nadine Walker said. “When they found out the news they were super devastated. It was crazy, the timing of it all, because we were together as a team. To hear it like that, and to hear about Gianna, that made it even worse.”

That night on the court, Sadler admitted it was difficult to concentrate at times. But when she locks into focus, she is very hard to stop.

This year, Sadler has upped her game, which has yielded a scholarship to the University of Washington. She signed her letter of intent in November, choosing the closer-to-home Huskies over Penn State and Kentucky.

Though she checked off all the boxes on being an unselfish point guard, she wasn’t capitalizing on her natural ability as a shooter. A revamped approach, some prodding and the intensive approach of playing on the Cal Stars Nike EYBL (Elite Youth Basketball League) team has brought out the shooter in Sadler.

Sadler doesn’t just lead the Bruins in scoring, she’s their top rebounder as well with an average of 9.3 per game.

“She can defend anyone in the country, she can run an offense as the lead guard very well and now she will even score,” said Kelly Sopak, founder and director of Cal Stars and head coach of the program’s Nike EYBL team and of state power Miramonte-Orinda. “A very tough combination.”

The Bruins closed the regular season with a record of 17-9. Sadler was averaging 18.0 points per game, topping out with 38 against Redwood-Larkspur on Dec. 28, and 26 against Salesian-Richmond on Jan. 7. She also averaged 3.8 assists, 9.3 rebounds, 6.2 steals and 2.3 blocked shots. She averaged just over 10 points a game as a freshman and sophomore, and 17.4 as a junior.

She’s now shooting more from the outside, much to Walker’s liking. The Bruins have had to lean more on Sadler and fellow returning starter, senior forward Kayla Revelo, because eight seniors, including three starters, graduated after their North Coast Section Division IV championship run a year ago.

The Bryant tragedy affected Sadler on a particular level, because she shares a similar father-daughter basketball bond with her dad, Gregory.

“He comes to every game, even in the travel season he would come,” Walker said. “He is super supportive of her and her career. I’m sure for her, that was another reason why (the Bryant crash upset her.)”

Sadler kicks back at small table located outside of a classroom on the St. Patrick-St. Vincent campus.

That relationship made making the decision to stay on the West Coast much easier. “It’s like I’m on my own, but if I’m needing my dad I can just fly back,” she said.

Said her father, Gregory: “It’s only an hour-and-a-half flight,” looking forward to the travels that already have taken them to Chicago, Atlanta, Kentucky and Indiana.

Not surprisingly, the family dynamic of Huskies head coach Jody Wynn and her husband, associate head coach Derek Wynn appeals to her greatly.

“For me they were more of a family-type coaching, so they were going to treat me like family,” she said. “It’s exciting for me because it was always a dream for me to play in the Pac-12. And to actually get a scholarship to a Pac-12 school was big, really big.”

She began playing with a basketball in her backyard when she was around 2 or 3, her father said. “I took her to the Y and we went around with the ball at the Y,” he said. “Then she played for Upward in a church league.”

Showing a quiet yet fearless nature, playing in a youth league in American Canyon and at home against her older brother, Gregory, sparked her interest in following the pro game’s best.

“Watching Kobe for sure,” she said. “I watched Kobe, I watched Kyrie (Irving). Kyrie was definitely one of my favorites. I wanted the ball in my hands. I wanted to be a playmaker.”

Walker said the first moment she saw Sadler touch the ball, she knew she had a special talent, and hoped she’d be her point guard for four seasons.

St. Patrick-St. Vincent coach Nadine Walker, right, has watched Tameiya Sadler evolve as both a player, and a person, these past four years.

“When she walked in I said, ‘Oh my gosh, I hope this girl stays,’” Walker said. “Because she is so good. I would love to work with her. With all her rough edges and all her challenges, I just feel like I was probably given that situation from God. Hey, here is someone who really needs you. I felt like, if she lets me, I can help her.”

It all came together her junior year, when St. Patrick-St. Vincent first scored a 54-53 stunning upset in the Tri-County Athletic League Rock Division over a loaded Salesian-Richmond team. They went on to win the program’s first section title since 2007.

“I was super excited,” Sadler said. “It was very emotional for me because it was my first year winning something in high school. So I felt I really accomplished something.”

Then came major strides in playing at a high level with Cal Stars Nike EYBL and Sopak.

“Before Sopak, I wasn’t shooting. But after I’ve played with him, I’m shooting outside shots more,” she said. “I’m a lot more comfortable with my shot and it is definitely because of him.”

Sopak said when Sadler began with Cal Stars in the seventh grade, he noticed her talent, and also her reluctance to shoot had nothing to do with a lack of ability. She made huge strides playing with national Top-5 recruits.

Tameiya Sadler has left her mark on the St. Patrick-St. Vincent school, and the Univ. of Washington will be next.

“This past summer she made one of the biggest jumps I have seen a kid make on the national stage,” he said. “This spring, when she was playing alongside two of the best players in the country in Cameron Brink and Brooke Demetre, she really didn’t need to shoot. However, if we wanted to win, she needed to be as aggressive and as willing to shoot as she was passing or playing defense. So she got out of her comfort zone and attacked more, shot more and even talked more. The end result is she became a national- level recruit.”

For a Bruins program known mainly for producing Alex Cowling, the 2008 SPSV graduate who went on to have a record-setting career at Loyola Marymount, Sadler has carved out her own Bruins legacy.

“In my 10 years of coaching, she is by far the most talented, gifted point guard I have coached,” Walker said. “I’ve had other great point guards, … but she really just had it all. I told her again, ‘the mental game, if you can fix that, if you can improve that, there is no stopping what you can do.’”