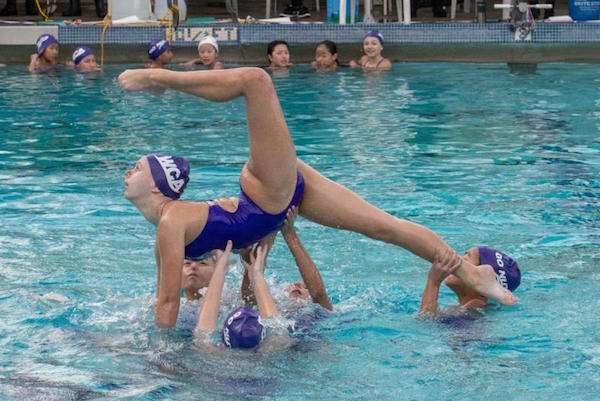 The Walnut Creek Aquanuts’ competitive season is off to a promising start! In January, the club qualified ten of its Junior and 13-15 age group athletes for National Team Squads.

All ten will move on to the final phases of National Team selection taking place in April 2019.

Successful Start to Season for All WCA Age Groups!

On February 11th, WCA sent their 12 & Under athletes to the Seaside Routine Invitational where they cleaned up gold in all categories entered!

10 & under Ghizal Akbar took the gold with her first solo and Chloe Davitiani took gold in the 11-12 solo category.

Cleaning Up With Medals

One week later, the Aquanuts’ 13-15 athletes faced some tough competition at the Santa Clara Invitational. WCA claimed gold in the 13-15 Free Combo event, the only gold for the Aquanuts at the competition.

“We entered more individual routines this year than we have in a long time! I am very proud of all our 13-15’s. It is early in the season, and we know what we have to do before Zones to qualify for Nationals!” 13-15 Coach Kristen Smidstra commenting on the overall meet performance.

The Aquanuts will send their top Jr. and 13-15 athletes to the West Zone Championships this weekend, March 1-3, 2019. The West Zone event will be held in Irvine, CA and is the qualifying event for U.S. Nationals in April, 2019.

Save The Date for Symphonic Synchro!

On May 11, 2019, the Aquanuts host their formal fundraising show and auction, Symphonic Synchro!

For more information go to www.aquanuts.org.

“The Walnut Creek Aquanuts is a world-renowned synchronized swimming club based in Northern California. Our mission is to develop athletes from novice to elite, building both bodies and minds and instilling skills that will serve our swimmers throughout their lifetime.”