Finally, the Monte Vista Girls Soccer-Danville girls soccer team could celebrate something it had never done before.

The Mustangs became the first CIF NorCal Division I girls soccer champions after a hard-earned 1-0 win over Archbishop Mitty-San Jose in a meeting of two of the nation’s most elite programs.

The program has won eight North Coast Section championships and earned national rankings as high as No. 1 over the years. Monte Vista (25-1-1) entered the game ranked No. 2 nationally by MaxPreps, with the Monarchs No. 4 in the country.

“It’s indescribable … so fun,” said sophomore Megan Edelman. “I am so lucky to be on such an amazing team.”

Edelman had her own amazing moment. After a scoreless first half in which legitimate scoring opportunities were scant, the Mustangs were trying for a breakthrough. It came in the 47th minute when Edelman launched a rocket from 20 yards out, striking the far right of the net. 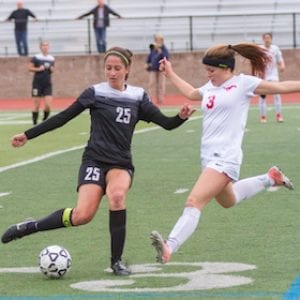 Megan Edelman, right, comes in for a steal against Mitty’s Mary McHale.

“I think it was a mistake from the middle, and then the player from out wide passed me the ball,” Edelman said. “I knew that I needed to take the shot because we weren’t having many opportunities. We didn’t really test the goalkeeper. So I just decided to take the shot and thank God that it went in.”

“She is pretty special,” said Monte Vista coach Chris Lum of the sophomore, who is already committed to UCLA. “She manufactures some stuff and makes plays most kids aren’t able to make.”

Finally the momentum the Mustangs sought had arrived.

They pushed hard on a direct kick that set up Emma Vane right in front of the goal. Somehow goalkeeper Emma Rodgers was able to make a jaw-dropping one-armed stop to block what was probably Mitty’s greatest threat on the afternoon.

“She is amazing,” Shepherd said of the freshman goalkeeper. “The reason we have less than 10 goals against us the whole season is because of her.”

Sydney Shepherd calls for the ball against Mitty.

Added Lum: “She’s growing; she’s only a ninth grader. And most importantly, is a very nice kid. Very humble kid.”

The Monarchs were coming off their first Central Coast Section Open Division championship, and their 14th CCS title overall.

They had met the Mustangs once before this season, falling by the same 1-0 score in the Tri-Valley Classic in December.

This meeting in the inaugural NorCal playoffs was a tense showdown.

“Mitty is obviously a super tough opponent,” Lum said. “I have nothing but respect for them. They are as athletic as we are, which doesn’t happen often. Tough, tough match.”

And finally the end to a journey that began with a Dec. 5 win at Las Lomas-Walnut Creek.

“They are beat up physically,” said Lum. “They don’t have too many three-game weeks, and this was one. That makes it tough. I think physically they are sort of ground down.

And psychologically and emotionally they are ground down. Usually what they like about high school the most is that it is short and it comes and goes.

So when it starts to drag, it’s a challenge. But what they were built for is overcoming challenges.” 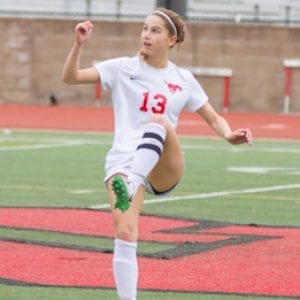 In the aftermath of the Monte Vista celebration came the realization that seniors had played their last game.

It was particularly emotional for Shepherd and Sarah Arnaudon, who played as freshmen on the varsity team that went unbeaten and ranked No. 1  in the U.S., only to lose to Liberty in the NCS championship game.

This year provided another high national ranking, with Monte Vista’s only loss coming on a forfeit that Lum said was due to a self-reported administrative error.

This time, the finishing moment was just what they wanted.

And a first for a program that has achieved so much.

“It’s amazing finishing our last game ever in high school with a historic win,” Shepherd said. “It really means something, not just to me but everyone else here. I still remember the day we lost against Liberty freshmen year, so this is incredible. It’s sad that it’s over, but I am really happy how we finished it.”