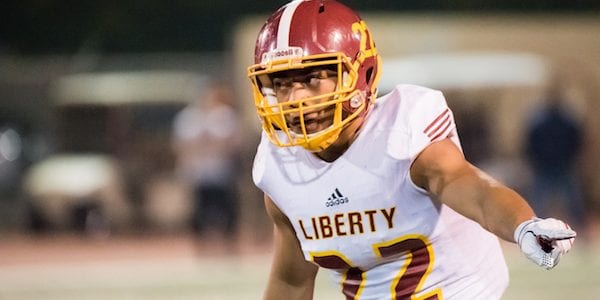 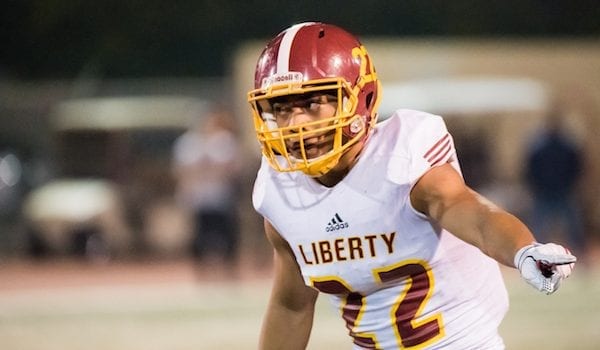 Liberty19 MP504 Player Of The Year17 Sione Vaki2
No Two-Way NorCal Player Did More For A State Bowl Winner Than The Liberty-Brentwood Receiver And Safety • Sione Vaki simply wasn’t going to...

Sione Vaki simply wasn’t going to be denied his chance to make a difference for his teammates.

After a regular season in which he was one of the East Bay’s most explosive offensive weapons — he scored at least one touchdown in each of his first 11 games — Vaki spent his final three games serving as Liberty-Brentwood’s most valuable defensive player.

All the way down to the team’s final tackle of the season.

With the Lions clinging to a 19-17 lead over Sierra Canyon-Chatsworth in the CIF Division 1-A State Bowl Championship game, the Trailblazers were driving to take the lead with less than four minutes to go. On a 4th-down-and-4 from the Liberty 37-yard line, Sierra Canyon handed the ball to junior running back Brendon Gamble. Vaki crashed down from his safety position and stuffed Gamble for no gain.

It was his 14th tackle of the game.

Liberty took over and converted a pair of first downs to run out the clock and win the program’s first CIF bowl title.

In a historic season in which the Lions also won a league title for the first time since 1985, Vaki’s efforts on both sides of the ball made him SportStars’ choice for NorCal Player of the Year.

Sione Vaki carries the ball across the goal line for one of his two touchdown catches at Pittsburg on Oct. 19. (Jean-Paul Toshiro photos)

“Such a humble kid. A blessing to coach,” Liberty coach Ryan Partridge said in a late January conversation with the magazine. “Extremely hard working. It’s always, ‘Yes, Coach.’ There’s never once been an argument. His teammates love him, every single one of my coaches loves him, the teachers and administration on campus love him.”

“He works harder than anyone else,” said Butterfield, who connected with Vaki for 20 of his 43 touchdown passes in 2018. “He comes out to the field and tries to perfect his craft every day. That’s just what makes him who he is.”

Vaki’s overall season stats included 70 receptions for 1,394 yards and the 20 touchdowns. He also had a rushing TD, a kick return TD and an interception return for a score. Vaki finished second on the Lions defense with 97 tackles and added four interceptions, two fumble recoveries and two forced fumbles.

Those defensive numbers really spiked in the postseason, when he delivered 56 tackles over a four-game stretch.

“We put him single-high and he cleans up anything that goes wrong,” Partridge said. “He had nothing below 10 tackles (per game) down the stretch. He was unbelievable on defense. On the offensive side of the ball, they definitely tried to take him out of the game, doubling him, taking angles on him and even tripling him sometimes.”

Vaki is a member of the Mormon faith. He will serve his mission prior to playing college football, but that didn’t stunt his recruitment. Vaki narrowed his choices to Utah and Washington State before eventually choosing the Utes during an emotionally gripping Signing Day ceremony at his church in Oakley .

“He’s a once-in-a-lifetime-type player and person.”