Sheldon Basketball: Out In The Open

Despite a strong run to California’s pinnacle prep basketball game, Sheldon High’s momentum faded quickly against the NBA-offspring superteam from Sierra Canyon-Chatsworth. It became apparent by halftime that they were outmatched.

Featuring notable playmakers Scottie Pippen Jr. and Kenyon Martin Jr., the nation’s top-ranked Trailblazers lit up the Golden 1 Center scoreboard and never took their foot off the gas. Their emphatic dunks, stingy defense and dominant performance in the paint put an exclamation mark on a 32-win season as the Trailblazers won 76-52 to claim their second-straight state title.

“I don’t even know if I can put a number, or a value, on the level of talent and the amount of talent we have here,” Trailblazers coach Andre Chevalier said. “It goes one through 15, and then 15 through 21 because our coaching staff is amazing as well.” 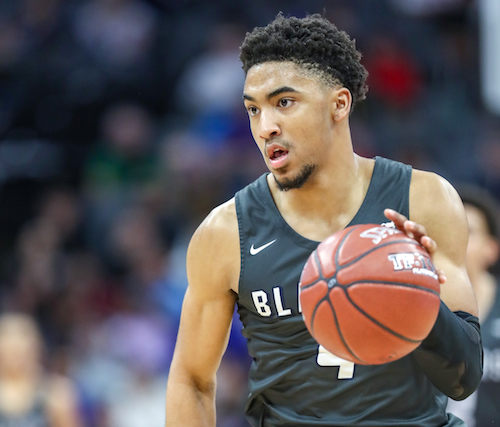 Kenyon Martin Jr., the son of the 15-year NBA veteran, delivered a double-double of 23 points and 12 rebounds in the state final. (David Gershon photos)

Martin Jr. recorded a double-double as he led all scorers with 23 points while adding 12 rebounds in 30 minutes. After the game, he pointed to his teammates as the reason for his in-game success, stating they make everything easier.

“This is the best team I’ve played on,” Martin Jr. said. “Everyone has their own piece and we all molded together well, so playing with these guys have made me better every day. I mean, the points I scored, everything throughout the game, I wouldn’t have that without them.”

Martin Jr. was dominant in the lane from the tip, but the lopsided score wasn’t all on the Huskies’ defense.

Despite playing on this stage a year ago, Sheldon looked shaky early on offense as they turned the ball over and missed transition layups — a key offensive feature of their win over Modesto Christian in the NorCal Championship game.

Whether it was nerves or bad shot selection, Sheldon started 1 of 7 from the field and trailed Sierra Canyon, 10-2, halfway through the first frame.

“I thought we played pretty good in the first quarter, but after that, it went downhill,” Sheldon’s coach Joey Rollings admitted. 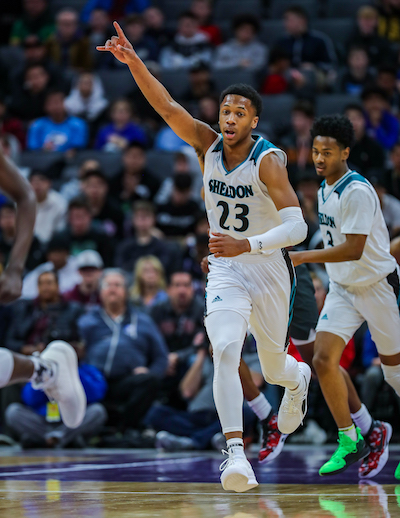 Although the Huskies put together a late run to end the first quarter and pull within three, 14-11, the Trailblazers exploded in the second frame. Sierra Canyon doubled-up Sheldon, 28-14 and really took control thanks to a 17-2 run, which included a handful of dunks from Martin Jr. and freshman Amari Bailey.

One of those dunks came at a cost.

Bailey’s second slam brought the entire Golden 1 Center crowd to their feet, but only some were cheering. Instead, fans let out a simultaneous groan as they watched the standout first-year player take a hard foul and fall hard on his back after driving to the rim for the left-handed jam. The subsequent replays took everyone’s breath away as it looked as if Bailey couldn’t brace for his fall and may have hit his head against the hardwood.

After a few moments on the ground, Bailey — an early UCLA commit — returned to his feet and stayed in the game.

“I didn’t actually know that I made the dunk,” Bailey admitted afterwards. 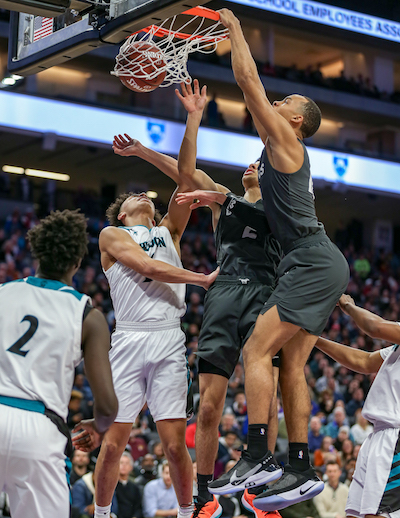 Sierra Canyon freshman Amari Bailey converts on one of his two tone-setting dunks during the first half.

That dunk epitomized the first half — Sheldon allowed easy looks, but made it difficult to score at times as they forced eight steals. And despite 12 points from junior star Marcus Bagley, the Huskies trailed 42-25 at the half.

“That’s a good team on that side,” admitted Bagley, who finished with 17 points on 4 of 12 shooting. “I mean, what can you say? You go out there, play hard and have no regrets.”

Rollings hoped his squad would come out stronger following halftime, but he needed a quick timeout in the third period after a 9-2 run for Sierra Canyon. That didn’t slow down the Trailblazers.

By the end of the third, Sierra Canyon had extended its lead to 21 points, 60-39, and hopes were bleak for the Huskies. Martin Jr. and Cassius Stanley had five points each in the third quarter and Stanley added to the Blazers’ highlight reel just a few minutes into the fourth with an up-and-under, two-handed reverse dunk.

For Stanley, this was his third state championship in his high school career after claiming the 2016 Div. IV title with Harvard-Westlake-North Hollywood before transferring to Sierra Canyon in January of 2018.

Scottie Pippen Jr. drives for a finger roll during the first half of the state championship game. He’ll play for Vanderbilt in the fall.

“These last two have been amazing,” Stanley confessed. “Your first one is great because it’s your first one, but these past two, I think have been better in my opinion. Because I think we’re just closer.”

A few players from Sierra Canyon’s roster were also familiar with Marcus Bagley — the younger brother of former Trailblazer and current Sacramento Kings player Marvin Bagley III — as he spent his first year of high school with the program and played in 26 games. The rematch added an interesting twist to the matchup.

“It was fun — I know a lot of those guys and have a lot of respect for them,” Bagley said. “But what can you do? You leave it all out there and you’ve got no regrets. It was fun going out there, competing, and maybe next year we’ll get it done.”

Bagley said he plans to return to Sheldon next year, which would mark the first time in his prep career he’s played back-to-back seasons with the same team.

“We have a lot of potential for next year,” he added. “You know, a lot of juniors coming back.

“I’m just going to get in the gym, take it to the next level and get back with these guys.”

The Huskies will lose six seniors to graduation this spring, but 13 players should be back for the team which finished No. 1 in SportStars’ NorCal Top 20 Rankings. And you can bet they’ll have worked on their stroke this offseason. 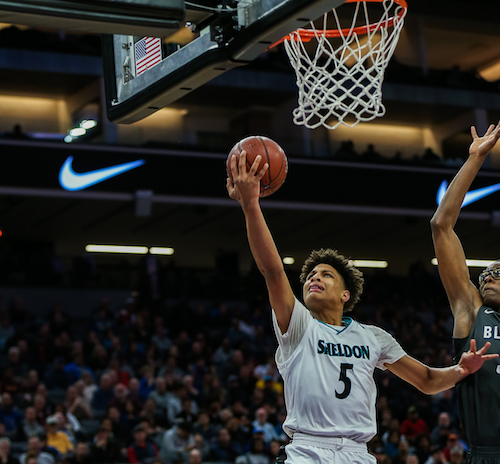 Sheldon junior Darren Tobias is one of 13 Huskies who will be returning to the roster for the 2019-20 season.

“These kids play a lot of basketball all summer,” Rollings noted. “I get them through June for one month — but they have to lift a lot of weights to stay healthy. They have to make shots to win. If you don’t make shots, you’re not going to win many games.”

Shots weren’t falling for Sheldon on Saturday and in the final three minutes, the game turned into a dunk show for Sierra Canyon.

Stanley led the party with a breakaway up-and-under reverse slam that ignited the crowd. Scottie Pippen Jr. added an alley-oop to Martin Jr. before Bailey recorded a steal and threw an alley-oop to himself off the glass for a two-handed slam.

In all, the Trailblazers threw down 12 eye-catching dunks.

“It put an exclamation point on the game,” Martin Jr. admitted. “(Bailey) has a bright future, and I’m going to come back and see as many games as I can.”

When the final whistle blew, players hugged and high-fived — Sierra Canyon was happy, no doubt, but no one was crying. They acted like the 76-52 victory was expected and that they’ve been here and done this before.

“At the beginning of the year, somebody asked us how we deal with the pressure of being Sierra Canyon, and going back-to-back,” Chevalier recalled. “And we said, ‘All we do everyday is work our butts off and prepare.’ And in the words of Cassius Stanley, ‘We sit back and let other people watch the show.’”

Despite the 24-point win, Chevalier pointed to a number of mistakes after the game, and his players nodded their heads in agreement.

“Honestly, we didn’t even play very well today,” Chevalier admitted. “We had so many turnovers and mishaps. Again, I think it’s a testament to these guys, and a testament to L.A. basketball. It is a monster to go through the Open Division playoffs. Whether it’s north, south, the Open Division is a beast … and I do believe this is one of the toughest playoffs in the country, not just California.”

The boys side took care of business, but coach Chevalier’s daughter, junior guard Ashley Chevalier for the girls team, also came through. She tallied a game-high 20 points in her team’s victory over Pinewood as Sierra Canyon swept both of the Open Division titles.

That’s what brought a tear to coach’s eye.

“Can you not ask me a daughter question because I’m gonna start crying,” he admitted. “The last two weeks have been crazy emotional… for her to win, and then for us to win, it’s a dream come true for our family.”