Jewel Roemer amazes in many ways. Foremost might be her positive energy, which shines like the sun.

And there’s her mastery of the game of water polo, which has propelled her to international fame and travel. She’s been to Australia, New Zealand, South Korea and Portugal — just since this spring.

To endure a 20-hour trip home after intense competition in Portugal and be back at high school and water polo practice the next day with a burst of energy is what Jewel Roemer is all about.

The Acalanes High-Lafayette senior is a national phenom who has energy to spare. Less than 48 hours from her long trek back from Funchal, Portugal, playing for the USA Women’s Junior National Team in the FINA Women’s Junior World Championships, she was back in her home pool on Sept. 18 playing with the Dons in a 14-1 win over Monte Vista-Danville.

“I love seeing my teammates,” Roemer said, beaming with joy. “They are my best friends. And it’s the funnest playing with all of them, for sure.”

These are happy times in the land of the Dons. They won the Amanda MacDonald Invitational in Atherton — packed with Central Coast Section standouts — landing a 15-6 win over Sacred Heart Prep-Atherton in the Sept. 20 finals. That put their win streak at 36, built on their incredible 27-0 season in 2018 that ended with the first North Coast Section Open Division championship in girls water polo.

Roemer’s return provided a noticeable boost, even for a talent-packed team with the likes of junior Claire Rowell, whose sister Lexi just started at Stanford, and four-year varsity star Mary Beth Heffelfinger. 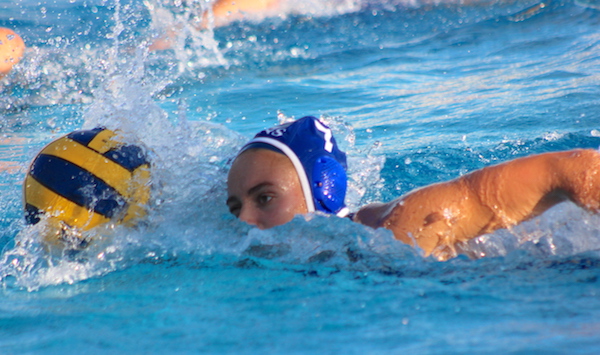 Jewel Roemer pushes the pace as part of an Acalanes counterattack during the Dons’ Sept. 18 match against Monte Vista. (Chace Bryson photos)

“She was back at practice last night and immediately the level of our practice was different,” Acalanes coach Misha Buchel said following the Sept. 18 win over Monte Vista. “It’s a higher level, the pace at which we play our scrimmage and run our offense is that much quicker. Players who were getting open, and now the ball — when she is the one with the ball in her hand — it finds them where it needs to be.”

“I think she really helps to push the intensity of the team,” said Heffelfinger, one of Roemer’s best friends on the team. “She is a really nice person. She is really smart, really positive. And a great friend to everyone.”

In Roemer’s case, it all adds up to excellence. She’s narrowed down her college choices to Stanford, Cal and UCLA — not just premier West Coast programs, but three of the top four teams in the country. Stanford is the defending national champion. She can sign a letter of intent as early as November 13.

“She has that perfect blend of incredible game sense, incredible physical talent and incredible discipline in her work rate. So every box gets checked,” said Buchel, who has taught her in Algebra II pre-calculus honors along with engineering and applied physics. “She doesn’t just rely on the fact that she’s the most physically talented kid in the pool and just kind of coast. She just doesn’t do that.”

Though a crushing 9-8 quarterfinal loss to Italy led to the U.S. finishing sixth, Roemer was the second-leading scorer for the U.S. at the Junior World Champinoships. She scored 15 goals — 11th of all competitors. Two scores were game-winners. One came with 46 seconds left for the 8-7 victory against Hungary. The other came with 1:46 left and decided the 9-8 win over Australia.

But don’t think of her as just a scoring machine. 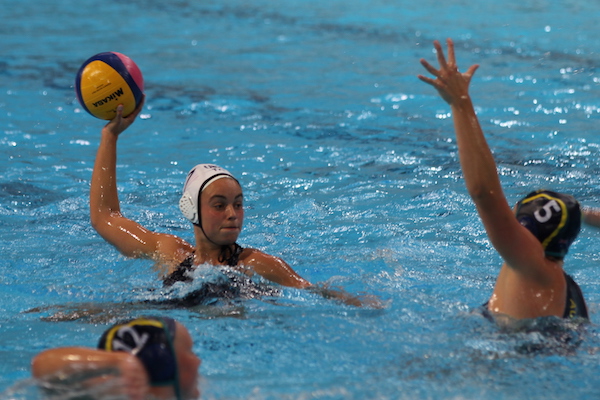 “She is not just a scorer or anything like that; she is a facilitator,” Buchel said. “That’s the role we use her in. Anything that we would use her to do, she would be the best person in the pool.

“So instead of having her be just the pure focal point of the offense, like the end product, we have her be the person who is setting everything up for her teammates. Because she has such gravity and attracts so much attention, that creates so much space for her teammates.”

Naturally, Roemer is just fine with such a role.

“I get to see the whole pool and it’s easy to facilitate in this high school game.”

That she grew to love water polo had to be a relief for her father. John Roemer starred at the sport at Cal for the legendary Pete Cutino. He has been a longtime coach himself and has spent the last 10 years coaching his daughter at the club level.

It wasn’t easy getting his kids to love the sport. His three sons all tried water polo but drifted to basketball, with Kyle and Paul playing for championship teams at De La Salle-Concord. Jewel, the youngest in her family by 14 years, wasn’t enamoured with water polo at first, either.

“She first started playing at 7 and absolutely hated it,” John Roemer said. “Who wants to get their face splashed, and get pushed under water?” 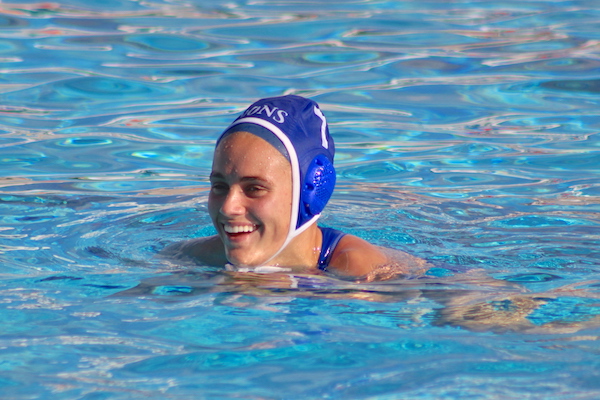 Roemer is all smiles while amongst her Acalanes High School teammates.

She soon showed an amazing amount of aptitude and technique, with her fundamental leg movement and comfort with the ball. “I’d take her to school 15 minutes early, and whether it was a football, a softball, we were throwing. Every single day she threw for 15 minutes.”

By age 9 she was playing at the 12-under level.

“Just even at those early stages, you could see everything she did was fundamentally sound,” Buchel said. “The way she picked up the ball out of the water. The way she passed for her young age. The technique was right from the very beginning. And that’s carried through going forward, as she has gotten older. That flawless technique in everything. How she positions herself in the water. She doesn’t have to worry about that stuff. And her game sense is just off the charts. Her anticipation even at those young ages was so good.”

After her family moved to Southern California, she spent her freshman year at Dos Pueblos-Goleta playing with standouts Ryann Neushul and Abbi Hill. But with her grandmother ill, her family moved back to the Bay Area the Wednesday before her sophomore year. She joined Acalanes, which was coming off winning its first NCS title, in Division II.

“It was very hard for her to move, but when she started going to Acalanes, she ended up loving it,” John Roemer said.

Her sophomore season, the Dons played Division I but lost a 9-8 NCS semifinal heartbreaker in triple overtime to Monte Vista. Buchel knew his team had the talent to go all the way, and said so right after that devastating loss.

“I said to the girls ‘Next year, we are winning them all. Next year we are bringing back a team that is good enough that if we put in the work in these ensuing nine months, we are good enough to win anything,’” he recalled.

It culminated in a 27-0 run to that first Open Division title, beating championship perennials like San Ramon Valley-Danville in the semifinals and Campolindo-Moraga in the championship game. 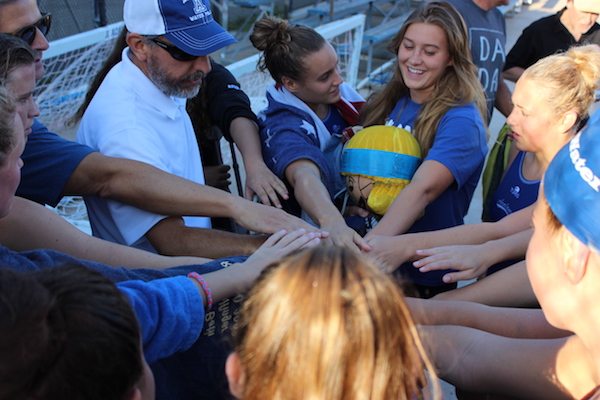 Jewel Roemer’s summer seemed to take her everywhere. After two weeks of intense training, Roemer spent a week playing on Portugal’s Madeira Island: “Gorgeous; definitely the most amazing place I’ve been to.”

What were her biggest takeaways from the Junior World Championships?

“The intensity, especially in such a high level tournament,” she said. “You really learn how to go 100 percent the whole time. And a lot of the technical aspects of the game. You learn a lot of little different techniques.”

“It’s very fast paced. 3-on-3 plus a goalie. Smaller course, smaller goals, no stopping so after a goal, you just go straight to defense,” she said. “It’s very quick; you have to sub on the fly. … It was really difficult to get the hang of. It was actually really fun.”

Somehow she had time in July to play in the Junior Olympics, winning the 18-under title with 680 Drivers Water Polo and sharing MVP honors with teammate Elena Flynn from Leland-San Jose. 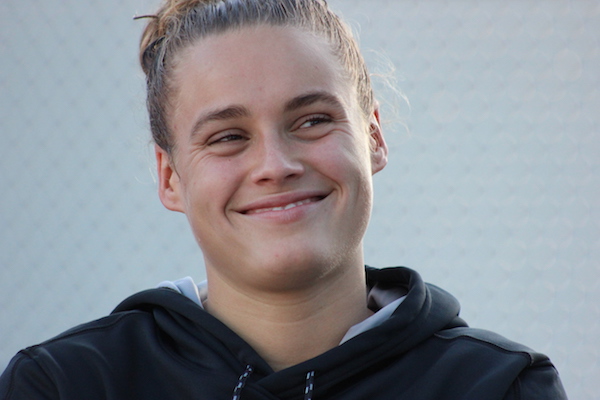 To drive home how highly she is rising in water polo, the Senior National Team added her to the roster for the FINA Intercontinental Tournaments in Australia in March and New Zealand in April. She was on the same team with East Bay native Maggie Steffens. Many regard the Monte Vista graduate and two-time Olympic Gold Medalist as the best player in the world.

Some have said Roemer is the best to come along the Bay Area scene since Steffens. Buchel said such comparisons are not a reach.

“To be in that conversation is no joke. There are some others who are in the conversation there, probably, but … she’s up there,” Buchel said with a chuckle of understatement.

Up there, and rising all the time.