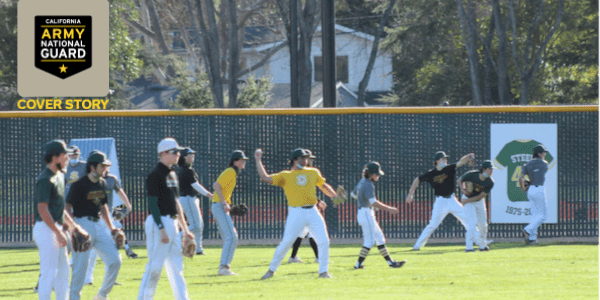 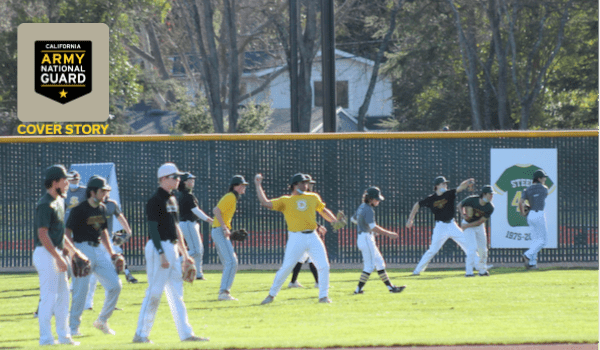 High School Sports | A Spring For All Seasons 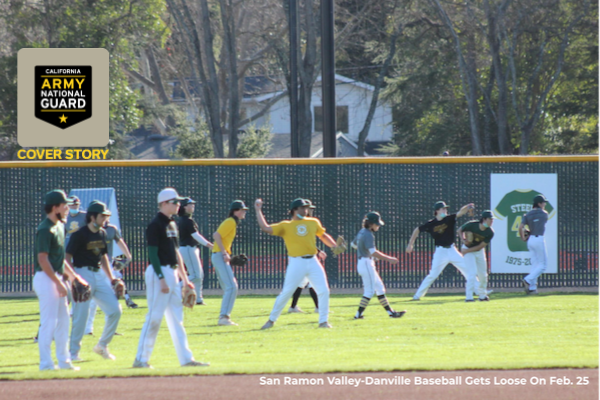 Athletic Directors And League Commissioners Want Nothing More Than To See Kids Back Competing — But Getting To That Point Has Never Taken More Work.

So are the administrators who make high school sports tick breathing a sigh of relief that sports are coming back?

Only if by some miracle they’ve found time to exhale.

After nearly a full year of no high school sports competition in California, the floodgates have opened for outdoor sports. Schedules that lingered in uncertainty for months are now a reality. Busy just got busier.

“The difference is now we are scheduling with a purpose,” said East Bay Athletic League commissioner Leo Lopez of the process that had been imagined and reimagined for months.

That preparation became reality on Friday, Feb. 19, when California Gov. Gavin Newsom and the state Department of Public Health announced that football and other outdoor high school sports were allowed to resume on Feb. 26, providing they met testing and other guidelines. The prevailing criteria is that COVID-19 case rates be inside a threshold of 14 per 100,000 residents in a county, a standard met by many but not all state counties.


It’s also a go for baseball, water polo, lacrosse, soccer and softball, which along with football were all previously in a more restrictive tier and unable to go forward. Indoor sports such as basketball, volleyball and wrestling may not be far behind. A March 4 court settlement potentially opened up all sports to the 14/100,000 case threshold.

“People had become cautiously guarded against hoping for it,” Heritage-Brentwood athletic director Nate Smith said. “And the clock was ticking, so it was one of those now or never moments.” 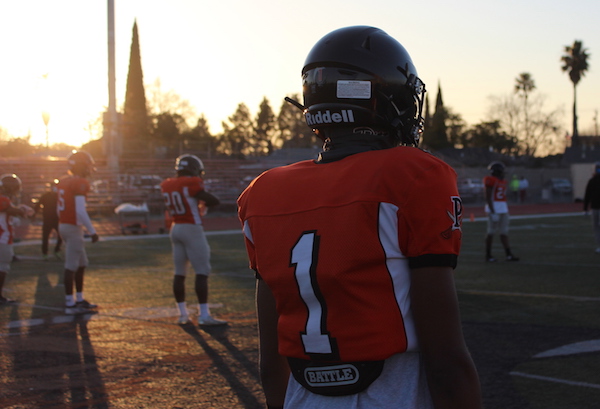 Lobbying efforts by groups like Golden State Football Coaches Community and Let Them Play California led to meetings with state officials, culminating in the announcement that football indeed could return this school year.

When California’s stay at home order was lifted in late January, non-contact sports in the state’s least restrictive tier like golf, cross country, tennis and track and field were allowed to commence. That rekindled hope that had dwindled over the previous months as COVID-19 surged nationally around the winter holidays and beyond.

“You prepare for the best and brace yourself for the worst, and we have become mentally braced to handle bad news so now we have to prepare ourselves each day to handle good news,” Smith said.

Even before the pivotal events of Friday, Feb. 19, athletic directors and league commissioners have been on nonstop Zoom meetings, taking multiple phone calls or brainstorming endless schedule possibilities.

“For months now we’ve learned to live with change and to be flexible,” said Lopoz.

It’s an example of how preparation is vital in any aspect of sports. Much like the basketball player who is a whiz at making free throws because he or she has tossed thousands of practice shots, administrators have put in months of reps of schedule-overhauling and getting protocols into action. 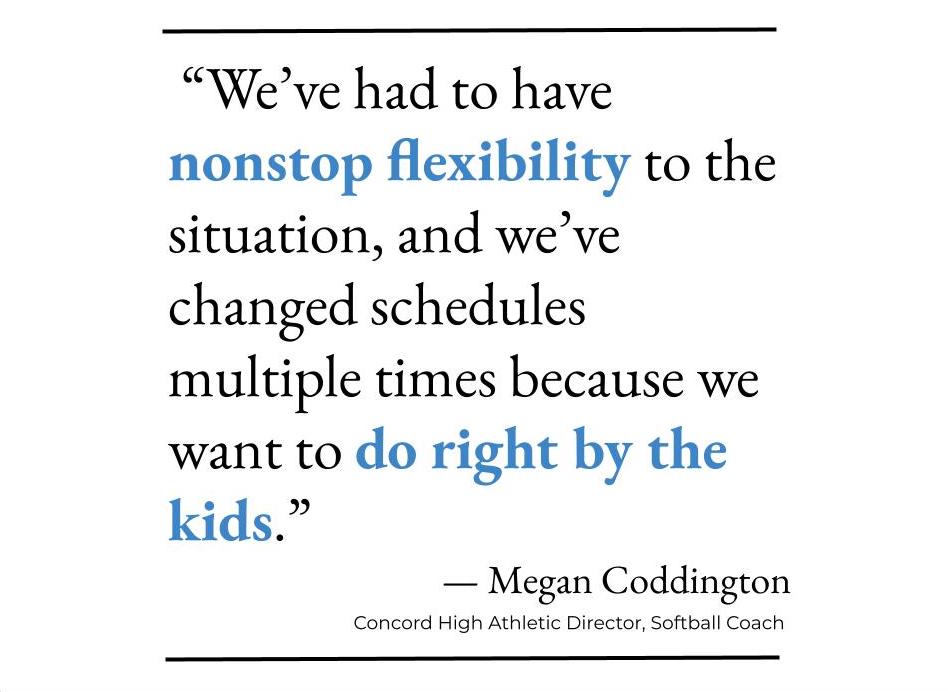 “Since May of last year, we have been in constant meetings, to go over updates and statuses,” Acalanes athletic director Randy Takashashi said. “Even in summer when we had never met (before), we met every other week. The last three months we have met weekly with the superintendent.”

Schedules that had been painstakingly planned and approved earlier in the process had to be overhauled or shortened as the window for having any sports grew narrower, Concord athletic director Megan Coddington said.

“We’ve had to have nonstop flexibility to the situation, and we’ve changed schedules multiple times because we want to do right by the kids,” Coddington said. “We do not want multi-sport athletes to have to make a choice.”

Schools have had varying degrees of regulated workouts, and athletes already are practicing protocols. Smith said the Liberty Union High School District realized the importance of athletes being able to work out safely on-site, which has helped in the return to competition.

“Our kids have been on campus and required to follow these protocols,” Smith said. “So to get ready to hit the ground running, hey … we’re there.”

When the football news hit, Smith already had four straight days of multiple Bay Valley Athletic League events planned for the next week. There were cross country meets being run on football fields or tracks the next day. Golf clubs and tennis racquets are being swung in matches that count.

“When I first saw the news (Friday) morning, my first thought was excitement, then immediately my second was ‘I’ve got a lot of work to do,’” said Takahashi.

Lopoz said that although good news had been anticipated, there was elation from it being reality from those long involved in the process. 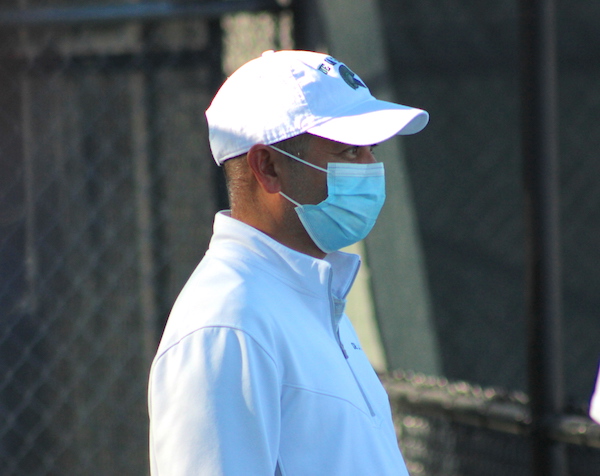 “It was a feeling of ‘Alright, let’s go!’ and lots of high 5s and celebration,” he said. Then everyone jumped into myriad phone calls and meetings.

“A lot of emotions run through those who have been intimately involved. I’m happy for all those student athletes who can participate. This is a lot of work and a daunting challenge, but we feel all the hard work will be worth it.”

Staging a high school football game or a track and field or swimming meet without the massive support structure that pro and college sports have is not easy. Now, throw in COVID-19 protocols, including testing. As high-contact sports, football and water polo are required to have weekly testing if the county case-rate is between 7-to-14 per 100,000.

Everything is happening in a compacted time frame, a big change from a highly-structured, long-established three-season sports year where conclusions of one season intertwine with the start of another. It’s a delicate balance between teams using the same field or gym. Somehow that has always worked but this will take extra work, with a scenario of football, soccer and track and field — each usually with its own separate season, all vying for field usage at once. It’s been left to individual leagues, or in some cases schools or districts to orchestrate when all those sports start seasons.

“I’m grateful our coaches are very cognizant of that and that we say we are 23 sports but we are one team,” Smith said.

At smaller schools like Berean Christian, often outside facilities are used, which adds another layer of planning. The school will continue to play football on campus on Saturday afternoons, which Wells is relishing.

“Football is a big part of the community and I feel that not having it has been detrimental to the community,” Berean Christian athletic director La Shawn Wells said.

There will be athletes who want to play multiple sports, so schedules and practices cannot be overwhelming. 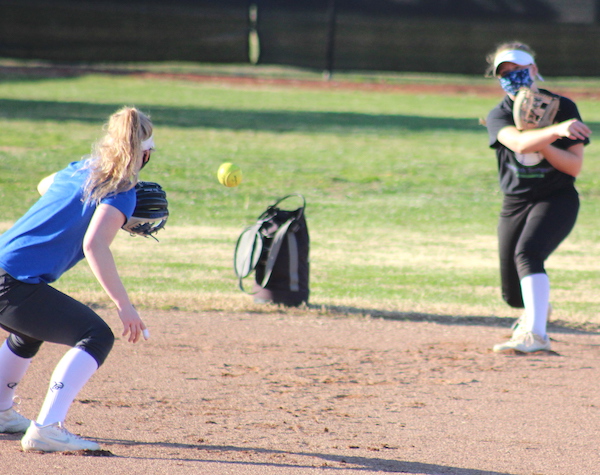 Masked players for the Heritage-Brentwood softball team get some infield work in during an early February workout. (Chace Bryson photo)

“The last thing we want to do with kids is deny them the opportunity to compete, or make it too difficult for them,” Smith said.

“If there was a game every night of the week, when would they practice? .. and that is across all the schools,” said Coddington, who spent five hours one recent evening to mesh schedules together to get an extra practice day.

While the March 4 announcement improved the chances for indoor sports, those seasons may meet more resistance at the county and school district level.

“It would be a shame to have no indoor sports at all, to have boys volleyball miss out two years in a row,” she said.

At this stage, it’s impossible to gauge how many schools, districts, leagues or athletes will opt out. Some may not have enough teams or even someone to coach a team. It’s begun to play out in Southern California, a region extremely hard hit by COVID-19.

When Concord and Mt. Diablo each saw they wouldn’t have enough players to field a boys tennis team, the solution was to combine the two schools into one team.

“The whole premise is for kids to compete, to have some sort of athletics,” Coddington. 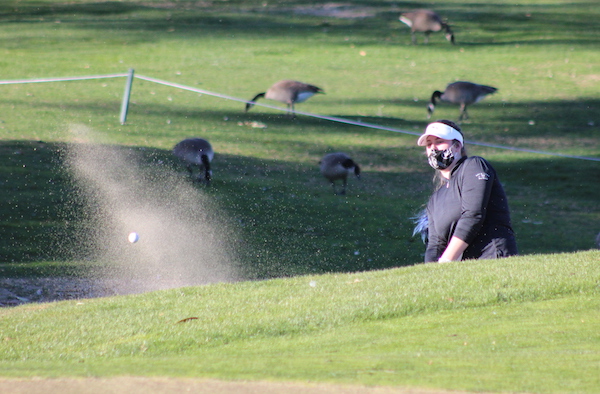 Antioch High golfer Riley Pacello blasts out of bunker during the team’s first match of the season on Feb. 22. (Chace Bryson photo)

“High school is about experience, so I encourage them to try different experiences,” Wells said. “If you are playing volleyball, try an event in track and field. The goal is they didn’t sit the whole year without doing something.”

If you can play, who do you play? State guidelines only permit competition with teams in the same county or a bordering one. It’s led to leagues pairing down to strictly divisional games.

For instance, the EBAL will have its Alameda County schools only play each other and the same for its schools in Contra Costa, a plan in place since July. Lopoz said it’s pure luck the EBAL schools evenly split to five per county. The Bay Valley Athletic League is geographically specific to East Contra Costa County, though it does involve three school districts. For leagues that encompass multiple counties and school districts, it’s more difficult.

The Diablo Athletic League has schools from four districts, plus private schools Berean Christian-Walnut Creek and St. Patrick-St. Vincent-Vallejo, and a range of school sizes from Divisions I through IV. St. Patrick was added to the mix just for this school year after the Tri-County Athletic League splintered when its West Contra Costa County School District schools opted for play only within its district, and Jesse Bethel and Vallejo decided to wait to play until their campuses reopen, the Vallejo Times-Herald reported.

It’s all being done with no plans for postseason play. No North Coast Section playoffs and no CIF state championships. Though the drive to win is still there, getting to play is cause for celebration. So are the chances for building of character and personal skills.

“I am a big believer of coaching from the inside out,” Wells said. “This is a great opportunity with no playoffs, no championships. It is ‘Can I make an impact on this person’s life?’ This year we can really focus on that.”

Smith was thrilled to see the level of excitement on the second day of girls tennis tryouts, when he handed out goodie bags from Gatorade in the school breezeway to a cheerful reaction from the student-athletes. They would be practicing, but not just in workouts for an uncertain season. 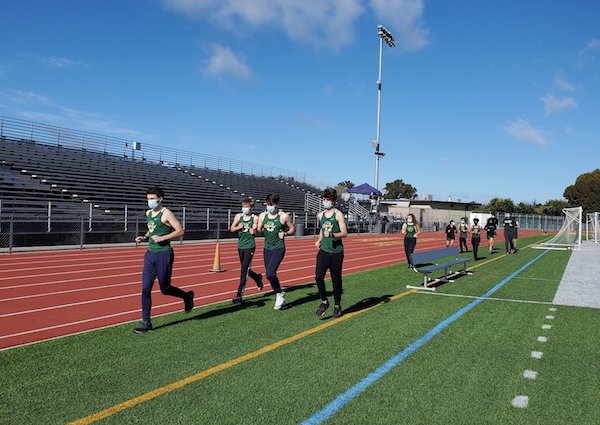 Concord High’s cross country teams compete for the first time in more than a year on Feb. 13. (Concord Athletics photo)

“To see the look on their faces — and their excitement to practice — was something else,” Smith said. “And it is completely different because there is now a schedule with games on them.”

Berean Christian has been functioning as a hybrid of distance and in-person learning, so there have been some interactions, but now Wells can give firm answers for eager athletes.

“With our kids you see them and talk to them, and they ask ‘Coach Wells, are we going to play?’” he said. “Now you can say, ‘It looks good.’ And you can really see the joy in their eyes.”

Coddington went to a cross country meet that featured some of the area’s smallest teams, each running separately but still experiencing running together as a team. Even with the changes, it was an “awesome” event, she said.

“The kids were so excited to be competing,” she said “They were smiling, and though they were wearing masks, you could see their eyes were crinkling because they were smiling. They have been training for seven months, so to be able to put that into action is so exciting.”