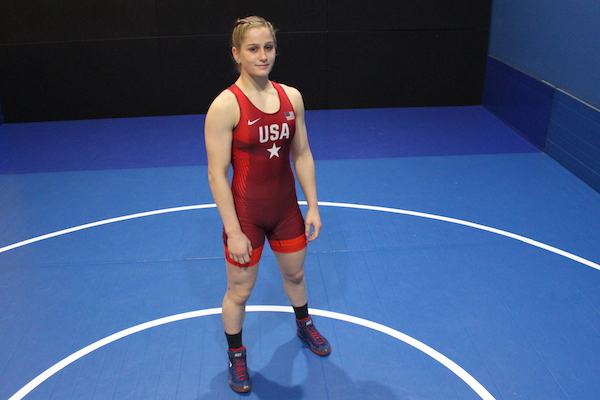 The next big thing in U.S. women’s wrestling is a remarkable 15-year-old College Park-Pleasant Hill sophomore with dazzling abilities and uncanny poise. She goes by the name Amit Elor.

She’s the reigning 150-pound CIF girls state wrestling champion with realistic expectations to win a U.S. Olympic gold in freestyle wrestling — a feat that’s only been achieved once before (Helen Maroulis in 2016).

The wide-smiling half-Russian daughter of Eastern European immigrants, and youngest of six children, Elor hasn’t lost a match to a U.S. wrestler in nearly four years.

She’s known for her quickness, both on the mat and on the clock. Elor won a section title in just 15 seconds and pinned five straight opponents in last year’s CIF tournament in a combined time of 2 minutes, 19 seconds, averaging under 28 seconds per pin against the best 150-pound wrestlers in the state.

“In the first match I saw her wrestle, she pinned a girl in 15 seconds,” College Park coach Bob Wilhelm said. “All the rest of her matches were the same. So after a while I told her that on her next match to instead try and get some work in, wrestle and let the girl go.

“It was just unnatural for her, and after watching her get into the second round of that match, I could tell I was messing her up. I told her we were never doing that again, and to go out there and do what you do.”

What Elor does best is win. She’s wrestled since she was 4 years-old and could smelt her trophies and medals into a life-size Iron Man suit. Here are some of the recent honors:

Elor will be too young to compete in the 2020 Olympics (you have to be 18 years old). However, her success should position her to challenge the world’s best grapplers in 2024. Japan’s Honoka Nakai is the only wrestler to come close. She beat Elor in a 3-1 semifinal match at Cadet Worlds in Bulgaria.

Nakai, 17, is a three-time Cadet world champion and will have to move on to the junior division next year. Elor has two more shots at the Cadet world title. Nakai survived Elor in the Cadet World semifinals by breaking a 1-1 tie on a scrambling takedown with 20 seconds remaining.

Amit Elor trains with a dummy at Forma Gym in Walnut Creek on Nov. 23.

“I should have attacked more,” Elor relented a month later. “It was still a great experience. I was very nervous beforehand, and I think the next time I go I will be able to treat it as any other tournament.”

It was her first time ever wrestling on sand.

“We wanted to do something fun and saw that Beach Wrestling worlds were happening the weekend after Cadet worlds. So we figured why not,” Elor said. “I almost lost my finals because I kept putting my knee in the sand, which is a penalty point in beach wrestling.

“But it was just really cool, washing the sand off in the ocean after each match. They had music, giant mascots and it was just a fun atmosphere.”

Elor could wrestle a hurricane. Her pedigree is so serious, opposing coaches interrogated Wilhelm for insight before the season even began last year.

“Word had got out and people were asking me what weight Amit was going so they could dodge her weight class for state,” Wilhelm said. “I was like, ‘What are you talking about?’ I didn’t even know she was on the team.”

After 13 years of coaching, Wilhilm is certain Elor is the best wrestler he’s ever seen, boy or girl. It’s fitting that her premier entry in the girls state tournament last February was also the debut event for both girls and boys wrestling at the same championship venue, Rabobank Arena.

After a 15-second pin in the opening round, onlookers decided to have a little fun — Vegas-style — with her quick aggression.

“I heard that some of the coaches at state were betting on her pin times,” Wilhelm said. “In one of the videos of the finals taken from upstairs you can hear somebody yelling out the time she pinned her in (29 seconds).”

Dual state championship brackets at the same revered arena is a good indicator for how much girls and women’s wrestling has grown in recent years. Twenty years ago you could only find a few girls on any wrestling roster, mostly featured in exhibition matches during team duals, or competing against boys in local tournaments.

Teams sent girls to compete in small unofficial state tournaments in the early 2000s. The CIF eventually organized NorCal and SoCal championship tournaments loaded with missing spots in the brackets from 2006-2010. West Covina won the first girls state tourney in 2011, and the event grew into the ultra-competitive showcase that made its way to Rabobank last year.

Elor casually holds a weight bar at her gym in late November.

It’s the kind of growth that excites Elor, who, despite her youth, has made a serious pledge to help her sport flourish.

“I think wrestling could become just as popular as sports like soccer and gymnastics for young girls,” Elor said. “How crazy would it be to have kids growing up and having wrestling be something that is taught and shown in P.E., girls doing takedowns during class.

“I want other girls to be able to wrestle in supportive environments with great partners and coaches who support them.”

“It’s her attitude, her work ethic, it’s the whole package,” Amit’s mother, Elana Elor said. “She is really special… like really special. Sometimes it feels almost too good to be true.

“She’s so smart, and is an excellent student.”

Amit’s career plans are innovative and carefully planned. She’s seen her older sisters and brothers (Gilly, Ronny, Orry, Aviv and Oshry) compete and educate and she’s determined to learn from that insight. She uses an independent high school program to study part of the year while traveling for elite tournaments or training with famed international coach Valentin Kalika, who coached the only U.S. Olympic women’s champion, Maroulis, at the 2016 Rio games.

Elor’s competitive drive has a clear objective: Compete at the 2024 Olympics in Paris.

The NCAA is still playing catch-up on women’s wrestling (it’s not even a championship sport), but Elor has bigger plans post-high school. She plans to earn a college degree online while she trains for the 2024 Olympics to be held in Paris. Amit says she’ll return to the education system after her wrestling career ends.

“She definitely knows what the main prize is,” Wilhelm said. “To be that young, thinking like she does is pretty amazing. She’s also such a humble, nice person.

Even there, bet on quick pins.