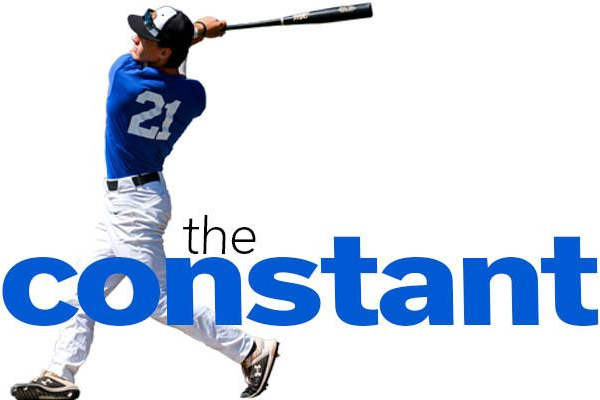 There’s baseball IQ and then there’s whatever-in-the-Isaac-Newton Anson Aroz is.

The Oregon-committed, switch-hitting catcher from Placer High-Auburn seems to see the diamond in code — or at least in distances and times.

“Say a base runner takes 3.5 seconds to run to second base on a steal, traveling 80 feet because of his lead,” Aroz explained. “A good pitcher can get the ball to the plate in 1.5 seconds or less, giving the catcher less than 2.0 seconds of ‘pop time’ to hit the mitt at second base.

“It’s the smallest fraction of a second that can make a difference. And it becomes a pretty complex equation the more you play and understand the game.”

It sounds like an explanation waiting to be etched onto an MIT hallway chalkboard, a la “Good Will Hunting.” However, Aroz is more of a country boy than he is a Bay Stater.

Aroz broke down the importance of a catcher’s pop time (his recent best is 1.8 seconds) just a few feet from 16 head of cattle on his grandparents’ 24-acre Auburn ranch. The interview interrupted his assault on a largemouth bass pond.

“They seem to be hitting every 15 minutes or so,” he said. “I’m using little natural brown/green plastic worms on a hook, bouncing them on the reeds.”

Everything Aroz does seems to be executed in a calculated balance.

Each day, the soon-to-be Placer senior hits from both sides of the tee inside his backyard batting cage. He disperses the routine with hits off a pitching machine and front tosses from his dad, Pete Aroz. Then he works on his blocking, receiving and presenting, changing the machine’s elevation and location to work in coverage around as much of the plate as possible.

He overloads his left swing a little, since learning another statistic four years ago — that switch-hitting catchers have the best chances of being drafted.

It’s all part of his analytical approach to the game.

“He took this game and was able to understand it better than I ever did,” Pete said. “He sees the game as constant mathematics, where every time the ball is put into play. Be it a bunt or a line-drive into the gap — it’s an equation to be solved immediately.

“And as the catcher, he is often the guy to solve it and tell people where they need to be.”

“He’s like the quarterback out there,” Placer baseball coach Dave Thompson said. “He is always aware of the situation and will catch stuff that even the coaches miss.”

Anson is poised to be a four-year starter at Placer, though he has seen more innings in travel ball than he has in prep. The former Auburn Little League all-star developed his skills with the NorCal Rebels. He went on to play for Brett Hemphill and the Golden Spikes before joining his current squad, the Chico Aces.

Travel ball put his name out there, but prep baseball matters in Auburn. Games at James Field are a pastime all their own.

“I’m really hoping we can get on the field this year and get back into the swing of things, especially for my senior year,” Anson said. “We might have one of the deepest teams we have had in years, and I am hoping we can make it to the section championships.”

Thanks to a 2019 realignment that shifted a dramatic imbalance in Placer’s lordship over the Pioneer Valley League in most sports, Placer baseball has the daunting task of standing out in one of the toughest medium-school leagues in Northern California, the Foothill Valley League.

Oakmont-Roseville dropped two games in the FVL in the last full season (2019). The Vikings went on to win a stacked Sac-Joaquin Section Division II bracket with five straight victories. Placer was one of the two teams to take a game from Oakmont, thanks in part to a three-hit game from Aroz, then a sophomore. The pitcher Aroz faced, Greg Nichols, was one of Oakmont’s aces, who appeared in both section finals games.

Ponderosa-Shingle Springs finished 2019 tied with Placer in the FVL standings. Both teams finished 7-8. Ponderosa still went on sweep the Div. III SJS bracket. The Bruins went 2-1 against Placer during that season. Lincoln and Nevada Union-Grass Valley also made the playoffs, but failed to reach the second round. No. 15 seed Lincoln fell just 3-2 to No. 2 seed Woodcreek-Roseville in the Div. II postseason.

Placer should be bolstered by a lineup that returns all but one senior (Payton Stumbo, a Nevada signee).

Six players — Anson, Martin Haswell, Carson Seeman, Myles Meyer, Bryce Baughman and Jake Richardson — played varsity as sophomores. It gives them the luxury of varsity experience, despite the pandemic-shortened 2020 season that limited the Hillmen to just five contests. Placer’s only losses in 2020 were to 2019 Div. IV runner-up Central Catholic-Modesto, in a doubleheader featuring scores of 11-9 and 10-9.

Thompson said Anson is a hard worker who deserves everything he has earned. He added that the squad is filled with even more quality players with scholarship potential.

“I fell in love with the area and the campus was a big deciding factor,” Anson said. “I also found the coaching staff and of course the baseball program itself very appealing.

“They are hungry for Omaha (Nebraska, the home of the College World Series).”

Committing to a college baseball program is sometimes just the beginning for a young player. Part of the process is also being noticed by major league scouts. Even if Anson enjoys a long career at Oregon, extensive time among pro scouts pays dividends.

He attends Prep Baseball Report events, like the professional showcase he attended June 28 at McBean Park in Lincoln. The event was heavily attended by pro scouts, who got a look at guys like Anson and others like Lincoln pitcher Jack Nilsson, who is also headed to Oregon. Sac State-bound Colby Lunsford, a Bear River shortstop and Anson’s Chico Aces teammate, was also at the showcase. The event mostly featured Northern California talent already committed to a four-year school.

Anson plays regular games with the Aces, either in Butte County, where COVID-19 has been reported to have minimal impact, or in areas where the team plays without spectators, achieving social distancing whenever possible.

Thanks to a supporting baseball family, Anson also has the resources to train at home. He’s also been able to use the home weight room of a Placer teammate.

Pete, who helped inspire Anson’s love for baseball, has been a big influence. Still, Anson has much appreciation for his mom, Sara Aroz, who made much of the travel ball lifestyle possible. It’s not much different than her own past in athletics, competing in prep and college rodeo (Hartnell College) circuits.

Sara also plays a role in his recruitment/scouting, capturing some of his best moments on camera and blasting out the heavily-viewed content on social media. It’s become a source of family pride to see Anson and his calf-roping sister, Lila Aroz, succeed.

“You start out as parents thinking your job is putting a kind, adventurous, smart person out there to contribute to the population. And then we have kids like Anson and Lila, and see how funny and intellectual they are,” she said. “They are really nice people, good to their friends and we couldn’t be prouder.”

Like any good coaching staff, Sara and Pete are always willing to let Anson call pitches. They sat him down recently to check in on his state of mind, because the constant work on velocity, hitting, receiving, presenting and blocking can make his routine almost machine-like.

“We wanted to make sure he was still doing it because he loved it, and had a nice candid conversation about this career, now that we are talking to MLB scouts,” Sara said. “He waited for us to stop talking and told us that he thinks he likes baseball even more than we do, and that he was good.”

It may have been one of Anson’s easier equations to solve.