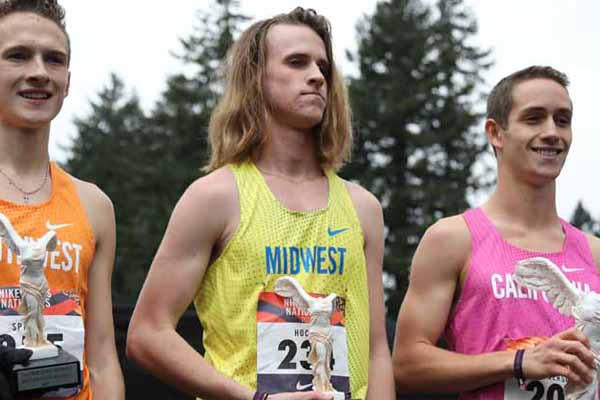 Gatorade Presents Winner with Honor in Front of Family, Friends and Teammates

In its 34th year of honoring the nation’s most elite high school athletes, Gatorade today announced Liam Anderson of Redwood High School in Larkspur, CA as the 2018-19 Gatorade National Boys Cross Country Runner of the Year.

Anderson won the award for his accomplishments on and off the field, joining a group of Gatorade National Boys Cross Country Runner of the Year awardees that have gone on to have incredible success – in fact, they’ve combined for 18 National Championships.

Anderson was surprised with the trophy immediately following his AP English Literature Composition class, surrounded by teammates, friends, family and coaches. Check out a video of the announcement:

The award, recognizes not only outstanding athletic excellence, but also high standards of academic achievement and exemplary character demonstrated on and off the field. It distinguishes Anderson as the nation’s best high school boys cross country runner.

A national advisory panel comprised of sport-specific experts and sports journalists helped select Anderson from thousands of high school cross country runners nationwide. Anderson is now a finalist for the most prestigious award in high school sports, the Gatorade Male High School Athlete of the Year award. It will be announced at a special ceremony prior to The ESPY Awards in July.

“From the moment Liam crossed the finish line third at the Nike Cross Nationals his junior year, he was on a mission to make sure his return to the event resulted in nothing less than a national championship,” said Erik Boal, editor for DyeStat.com. “In the end, he not only set a course record, but prevailed against one of the most talented fields in meet history. Anderson valued quality over quantity with his racing schedule throughout his career. He always found a way to reach another level of preparation and performance when the postseason arrived to assure he would be his best when it mattered most.”

ATHLETE OF THE YEAR LIAM ANDERSON

The 5-foot-7, 130-pound senior raced to the national championship this past season with a course-record time of 14:57.6 at the Nike Cross Nationals Final. California’s returning Gatorade Boys Cross Country Runner of the Year, Anderson won the Division 3 individual state championship in 14:55.3. He also broke the tape at the Marin County Athletic League championships, the North Coast Section championships, the Mariner Invitational, and the Clovis Invitational.

A certified Wilderness First Responder and a member of the Marin County Search and Rescue team, Anderson has volunteered as a tutor for freshmen at his school. Anderson has maintained a weighted 4.26 GPA in the classroom. He has signed a National Letter of Intent to compete in cross country and track and field on scholarship at Stanford University this fall.

“So many former Gatorade Player of the Year winners have gone on to win professional and college championships, and many have also turned into pillars of their communities, becoming coaches, business owners and educators,” said Gatorade Senior Vice President and General Manager Brett O’Brien. “We know this award is just the first of many accomplishments for Liam Anderson.”

Through Gatorade’s cause marketing platform “Play it Forward,” Anderson has the opportunity to award a $1,000 grant to a local or national youth sports organization of his choosing. He is also eligible to submit an essay to win one of twelve $10,000 spotlight grants for the organization of choice, which will be announced throughout the year.

Previous winners include a distinguished list of athletes, such as Peyton Manning, Abby Wambach, Karl-Anthony Towns, Derek Jeter and many other sports icons.