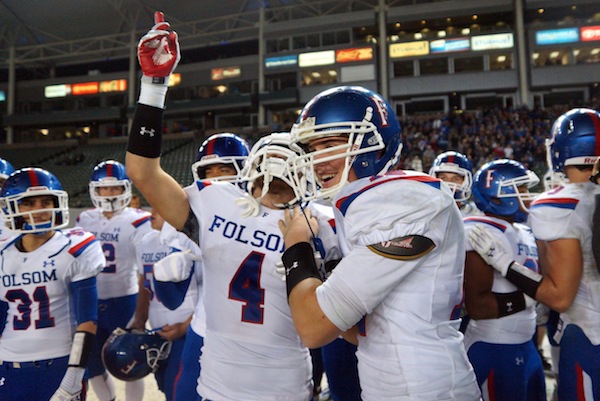 Cal-Hi Sports Builds A List Of Its Top-Ranked Public School Football Team For Each Season Dating Back To 1970; Folsom Appears Twice Since 2010 •

Although competitive equity seeding and the continuous adding of divisions does give more public schools the opportunity to enjoy CIF section and state playoff games, the gap at the top of the state between private and public school football continues to widen.

For all we know, the Centennial-Corona team that was beaten 42-12 last Friday by Mater Dei -Santa Ana could be the best public school team in California this season. There are a lot more games to figure out that claim.

In recent days, as the probability increased of Mater Dei and St. John Bosco-Bellflower being far in front of any other teams in California (public or private) for the fourth straight year, got us to wonder what would be the Public School Football State Team of the Year for the last 40 to 50 years. After all, it’s not like we’re just starting out doing State Top 25 rankings. We’ve been doing overall state rankings every week for 40 years and can go through a lot of archival material to compile such a list.

For the list that follows, we aren’t going to go against our own final state rankings, but we’ll also mention other public school football teams that were outstanding and arguably could be the choice.

Only loss to state No. 1 Mater Dei plus a win over Arizona’s top team (Chandler) gave the Huskies the edge over CIF D1-AA state champ Folsom, which lost its only game to De La Salle and had to go into overtime to win in its state final.

Losses were to IMG Academy and St. John Bosco in games in which Stanford-committed QB Tanner McKee had to leave with injuries. Folsom went 16-0 this season and won CIF D1-AA state title, but not sure beforehand that the coaches thought the Bulldogs would be that strong because the schedule wasn’t that difficult.

This was the year St. John Bosco won the CIF Open Division. The Huskies only lost to the Braves 49-47 in a back-and-forth contest in the CIF Southern Section D1 semifinals. They also only lost to IMG Academy 50-49 when IMG made a two-point conversion with just seconds left.

This might have been the Huskies best team. That’s the one, remember, that got past St. John Bosco in the highest scoring CIF Southern Section D1 final ever but lost to De La Salle in the state game 28-21. Mission Viejo won the CIF D1 state crown and ended 16-0.

No doubt about the Bulldogs being the best public school for this year. Some thought they were better than De La Salle, but couldn’t be ranked higher than the Open Division champs since the Spartans had won easily in matchups vs. Folsom in 2012 and 2013. This team is the one that had Jake Browning at quarterback and set the national single-season scoring record.

One of the losses was to De La Salle in the CIF Open Division final that was the last game for retiring DLS head coach Bob Ladoucuer. The other was to Vista Murrieta, which was avenged in the CIF Inland Division final and when the Broncos were 13-0. The Huskies also won in the first-ever CIF SoCal Open Division game over 14-0 Narbonne.

We ranked head coach Coley Candaele’s club higher than Bakersfield (13-0), Helix-La Mesa (13-1) or Westlake (14-1), which lost by a big margin to De La Salle in the Open Division state final). Why? Vista Murrieta won the Inland Division title (over Centennial) and didn’t lose on the field. Forfeit losses took the Broncos out of consideration from perhaps playing De La Salle.

This was the Bulldogs’ first CIF state title and came in D2 with a win against Serra of Gardena. Their loss was to Grant of Sacramento early in the season, which was avenged in the CIF Sac-Joaquin Section championships.

This was an excerpt of a Cal-Hi Sports Gold Club post. You can subscribe to their Gold Club for just $3.99/mo. or $9.99 for three months.