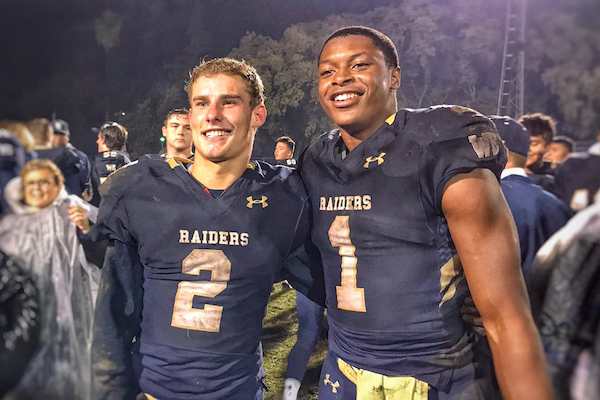 Mud can be washed away. Pain fades. And rain doesn’t erase the past. But mixed together — that’s a recipe for redemption for the 2018 Central Catholic football program.

Last year’s heartbreaking loss in the section semifinals was still fresh on the Raiders’ mind as they took the field to host yet another Sac-Joaquin Section power in the semifinals of the Division II playoffs Friday night.

After losing to Del Oro-Loomis on their home turf last year, and missing the championship game for a second straight year, the players from the Modesto-based program were determined not to let that happen again.

And it was the defense that stood tall in the final seconds against visiting Inderkum.

After forcing a fourth quarter interception in the end zone, Central Catholic clung to a touchdown lead in the waning minutes and needed one final stop to secure victory.

On their last drive of the game, the Tigers’ offense converted twice on fourth down and short. Eventually, they found the end zone to pull within one point, 31-30, with 1:35 left to play. Inderkum elected to go for two in an attempt to eek out a win.

“When we scored, we were going to win it — we came down here to win,” Tigers coach Terry Stark stated. “Even when they jumped out (at the end), we fought back and fought back. And when you have a shot to beat these guys, you do it.”

Inderkum had its chance — the Tigers dropped back to pass and quarterback JJ Ray hit his target over the middle of the field. But the ball was thrown hard, and the receiver couldn’t secure the catch.

“It was a pass play that we have worked on all year long, so yeah (I felt good about it). I mean, it hit him in the chest,” Stark said. “It’s a really tough play to defend because you fake a sweep across the quarterback and you curl the fullback and receivers up and we thought it was the right call.

“Who knows if you’re going to kick it on a muddy field and make it. The difference is, it bounced off our guy’s pads and we could have won by a point.”

As the football ricocheted out of bounds, the Raiders began celebrating.

Caked in mud, and drenched from the rolling rains, players and coaches cheered and hugged as they overcame recent postseason perils to put Central Catholic Football into the Div. II finals for the first time.

“We’re back,” Central Catholic football coach Roger Canepa exclaimed to his team after the narrow victory. “We’ve been to 3, 4, Open Division and now we’re in the Division 2 section finals.”

The victory over Inderkum sets up a rematch with Del Oro, led by multi-purpose star Johnny Guzman and others, next Saturday in the 2 p.m. championship game at Sacramento State’s Hornets Stadium. But it looked as if the Raiders might not get that chance early on Friday.

“We didn’t play well — we played a bad first half,” Canepa said. “As coaches, we made some bad calls. We had substitution errors, but the players played hard.”

The day known to most as Black Friday turned into a wet and muddy night for both squads. The grass was churned and the rain came down hard at the start of the second half.

Inderkum held a 24-12 lead at the break after putting up 17 in the second quarter alone.

The Raiders had looked good on offense, but turned the ball over on their first drive and failed on a pair of two-point conversions. In the second half, they relied on their stud senior running back, Dawaiian McNeely. McNeely took the second half’s opening play from scrimmage 78 yards up the gut to cut into the Tigers’ lead.

“It was raining, and it was raining hard, but it was beautiful. Perfect football weather,” McNeely said. “I used my towel to wipe my forearms and wipe my gloves, and I just hit it. I trusted the hole would be there, and trusted my lineman. And I didn’t stop running — no look-back or anything — just green and brown grass in front of me.”

Despite carrying the ball just 12 times, McNeely tallied 137 yards against the Tigers and rushed for two scores.

His running mate, Kyle Jacklich, added 65 yards and another pair of touchdowns in the win.

“They popped that first one all the way, but the rain didn’t have anything to do with it,” Inderkum’s coach Stark admitted. “They knocked us off the ball a couple times on those big runs — that was the difference.”

Meanwhile, Central Catholic’s defense, which allowed huge, gashing runs in the first half, clamped down late in the game. They held Inderkum scoreless for 22 minutes in the second half and came up with the game’s decisive turnover.

With less than 10 minutes to play in regulation, Inderkum had the ball in the red zone and trailed by a touchdown. Ray had just completed a 49 yard pass down to the 10-yard-line and looked to get more on the ensuing play. As he dropped back, he was hit and the pass sailed into the hands of Central Catholic safety Justin Traina.

“I saw them coming straight at me, and I knew they were taking a shot in the end zone,” Traina explained. “The guy who they were throwing to, wasn’t my guy, but I saw them going to him and I knew I had to make a play.

“They got me over the top on the play before … they did a double-move, and got me on an out-and-up, so I knew I had to make a play. I just stepped in front and picked it off.”

That interception kept Inderkum off the board — a turnover which ultimately decided the outcome in the final seconds — and gave the Central Catholic football program its first shot at a Div. II title.

“It’s already special, but that’s going to be really special for us,” McNeely said, stumbled to find the right words. “I, it’s going to be wonderful, but I’m just speechless.”

McNeely is looking forward to his team’s rematch with Del Oro.

“I wouldn’t want to play anyone else,” he added.