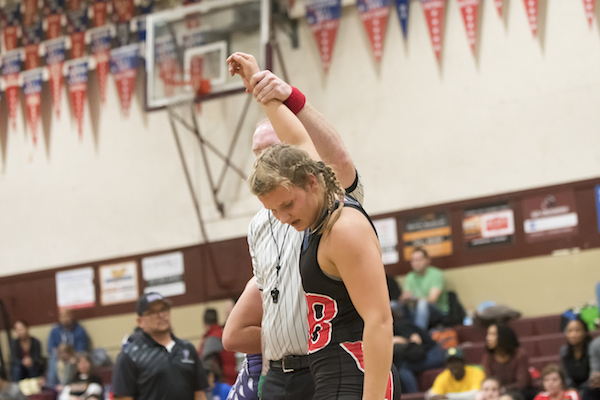 Ready for Rabobank: Girls Wrestling Joins The Big Show As CIF Welcomes The Field To Its Premier State Championship Venue Alongside The Boys •

It will stretch the action to three days and eliminate the finals stage and spotlight, but the girls wrestling earned participation at the premier venue of prep wrestling this weekend, Rabobank Arena in Bakersfield.

Four hundred and forty-eight of the best girls wrestlers in California will join a field of 560 top boys for 25 total rounds of the all-division CIF Girls Wrestling Championships.

“Girls are just as technical and just as mean. They cut weight and they bleed just like any other wrestler.”

“I have coached some of the boys on this team since they were little kids, and I want see them wrestle at state too,” Kenney said. “The boys are stoked, the girls are stoked and we are all happy to have one big family experience together.

“It doesn’t get any better than this.”

The race to climb the CIF Girls Wrestling Championships medal podium will be fierce.

Below is a look at Northern California’s section champions, and the best hopes for CIF hardware from this historic prep championship event.

Top seed: A returning CIF runner-up at this weight, Rodriguez picked up the No. 2 seed and can’t meet a seeded wrestler (No. 7 Lee) in the championship bracket until the quarterfinals. Rodriguez pinned or shut out all of her CCS opponents and is 33-2 on the season.

Upset special: Lee pinned every opponent in the CCS championship and is a threat to stick anyone in the bracket.

Top seed: Turner, the No Guts, No Glory Hardwood Palace (Rocklin) champion, picked up the top seed and is likely to earn her first CIF medal. She is one of five seeded underclassmen.

Upset special: Matera, the No. 6 seed, won two close matches to close out her NCS title and has 43 wins on the season.

Top seed: Soto, the No. 1 seed, is a potential four-time CIF champ. She’s the class of the Northern Section.

Upset special: Escalon’s Mikayla Vega was runner-up in the SJS and lost just 6-5 to Soto in the finals. She is the No. 3 seed and could win her way to a finals rematch.

Top seed: Lopez, a junior, earned the No. 2 seed after two close wins in the SJS semifinals and finals. Her savvy in a tough bracket last week could make the difference at state.

Upset special: After winning the CCS Siason did not earn a state seed and will look for vengeance against No. 8 seed Rebecca Drown (Norco, Southern Section 3) in the opening round.

Top seed: Lopez is the No. 3 seed after a 25-3 season and NCS title. She won five of her six NCS victories by pin.

Upset special: Calhoon won three of her CCS matches by three pins in under 43 seconds, including a 34-second pin in the finals. Her fourth win was a pin in 1:07. She’s a dynamite No. 5 seed.

Oak Ridge’s Emily Se enters as the No. 4 seed and is wrestling with confidence after her section title victory (Ike Dodson photo).

Top seed: Olmos is the No. 3 seed at 126 after winning the CCS with a 6-4 decision. She has a lot of opportunities to succeed in the bracket’s bottom half.

Upset special: Se, a former Judo champion, is back at Oak Ridge after missing the 2018 season. She dropped weight for the postseason and is a dangerous No. 4 seed.

Top seed: Liberty’s Lopez earned the No. 2 seed after a 33-1 season and won all of her NCS matches by technical fall or first-round pin.

Upset special: Despite winning the CCS with a 4-1 decision, Contreras is seeded just sixth in the CIF while CCS runner-up Anna Smith of Menlo nabbed the No. 3 seed. The disrespect could cost her opponents in the bracket’s bottom half. She could face Smith in the quarterfinals.

Top seed: Garibay is a well-deserved No. 2 seed after rolling through the NCS with three pins and a major decision over CIF No. 3 seed Joanna Qui of Albany. She’s a returning CIF runner-up.

Upset special: Oakdale’s Faalia Martinez, the younger sister of returning CIF boys runner-up Gabriel Martinez, dropped a 4-2 finals match in the SJS finals and is a dangerous No. 5 seed.

Top seed: LoPresti leads a sterling cast of wrestlers at Albany and will look to lock up significant team points from her No. 2 seed.

Upset special: Freitas was undefeated for Team USA at the PanAm games and could win her first CIF title after training with two-time CIF champion Rory Coscia of Enochs-Modesto.

Top seed: Another possible four-time CIF champ, Elor picked up the No. 1 seed after an undefeated season and a 15-second pin in the NCS finals.

Upset special: Nebesnick didn’t earn a seed after winning the CCS and could shoot a quick single-leggy on fifth-seeded NCS runner-up Beyonce Garcia (James Logan) if they face in round two. All the single leggys, all the single leggys.

Bella Vista’s Yelena Makoyed (right, and also pictured at the top of the post) is the highest seeded NorCal wrestler at 160s at No. 3. (James K. Leash photo)

Top seed: Makoyed is No. 3 at 160 after three pins and first-round tech at Masters. She’s a back-to-back Napa Valley Classic finalist and won the bracket with four pins this year.

Top seed: Vergara, an SJS and Napa Valley Classic champion, is seeded second here after winning four matches by pin last week. She was a 2018 CIF runner-up at 150 pounds.

Upset special: Mary Lubiens of Del Oro won the SJS North and was the top seed at Masters until a string of defeats dropped her to sixth place. She could be a tough second-round opponent for top-seeded Adelina Perra of San Fernando, the LA Section champ.

Top seed: Akinola is ready for CIF gold after a runner-up finish last year at the same weight. She’s the No. 1 seed.

Upset special: None of the Durham girls earned a seed after winning the SJS Masters and Hyatt has enough nifty pinning-combinations to do damage in the bracket’s bottom half.

Upset special: Tagivale Vaifale of Pacheco-Los Banos was the SJS runner-up and could be in line for another CIF medal after taking fourth last year.