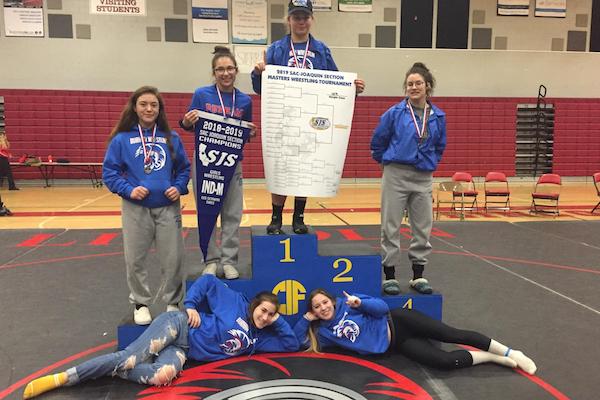 Hailing From A School With A Student Body Under 300, The Durham’s Girls Wrestling Team Made History With A Section Title And Four State Berths •

Moments before the medal round at the Sac-Joaquin Section Masters Girls Wrestling Championships at Lincoln High in Stockton, Durham wrestling coach Trent Kenney brought his squad together for an urgent update.

“I told them that our school of 260 kids was in first place, and could do something that has never been done before and will probably never be done again,” Kenney said. “I told them to try and make some history.”

Kenny’s added pressure, stacked onto the backs of his wrestlers before the biggest matches of their lives, would have folded weaker legs.

And then they danced.

“The closer we got, the more nervous I got,” Kenny said. “But the girls were still having fun, dancing during warmups. And then they stepped up and won matches they were big underdogs in.”

Durham wrestlers waltzed to wins in three of four medal-round matches to snare crucial team points. The Trojans’ (88 points) edged rival Orland (72.5) and SJS stalwart Del Oro-Loomis (72). The Golden Eagles of Loomis had out-pointed Durham for the North Region title just a week prior. Tokay-Lodi, winner of three of the last four Masters titles, was fourth with 71.5 points.

Durham also qualified the school’s first four wrestlers to the CIF Girls Wrestling Championships, a three-day affair at Rabobank Arena in Bakersfield. It begins Thursday, and runs at the same time and venue as boys state, another CIF first.

One of the smallest schools in the CIF, the Durham wrestling team sports a combined roster of 24. Kenney and boys coach Tony Cardoza train both squads together in the same wrestling room. Girls drill and spar with Durham’s boys, winners of nine of the last 10 Div. III Northern Section wrestling titles.

The boys even have a CIF celebrity in Jacob Christensen, the state’s No. 6 seed at 220 pounds.

Cardoza said the boys were elated when the girls won Masters. Some were able to watch the feat because the Northern Section wrapped up boys competition on Friday.

“This was one of the finest weekends we have ever had,” the Durham wrestling coach said. “When you know the backstory of each one of these kids and you watch them come together as a team, that is one of the best things to see.

“Our kids come from so many different walks of life and backgrounds. Some of them grew up in very difficult home environments.”

Zoey Moack, Durham’s 101-pound Masters qualifier, was in Paradise when the Camp Fire engulfed the town in November. The Durham wrestling program instantly embraced her upon her arrival via transfer.

That closeness stayed with the team all season, and visibly sprung to life on the dance floor, i.e. gym mat Saturday.

In the finals, Durham junior Allyson Hyatt was trailing Oroville’s Kristina Wilson — and likely to suffer her third consecutive loss to the Tigers’ senior — when she felt an arm grip her midsection. It was Wilson’s “tight waist,” a hold that keeps the bottom wrestler from squirming away for escape or reversal points.

It was also the moment Hyatt was waiting for.

She hooked the arm and popped her hips, rolling Wilson onto her back. She held the position to earn reversal and near-fall points, then kicked her legs over to capture the come-from-behind pin.

“If (Hyatt) gets you on your back, you are in deep trouble,” Kenney said. “She used the same move in the semifinals when she was down 5-0 and got the pin.”

The semifinal move earned Hyatt a win over SJS South Region winner, Valerie Osborn (Oakdale). It also landed Hyatt into a good spot in Thursday’s CIF bracket. She opens with a match against North Coast Section No. 4 qualifier Ruby Joseph (Cardinal Newman-Santa Rosa) and could overtake seventh-seeded Riley Cianna of San Dimas (Southern Section No. 4 qualifier) in the second round.

Coach Kenney said the team is tapering off some of the intensity of early-season workouts and fine-tuning areas where the girls can make small improvements before state.

“They need to know that they deserve to place and do well at state,” Coach Kenney said. “I told them that a lot of people are just happy to make it to state, and you need to go in there and give them that reason to quit.”

“We wrestle in tough tournaments all year, so this is a different venue with the same people on the mat,” Cardoza added. “There is no reason why they can’t go out and do the same thing they did last week.”

Every good dance calls for an encore.