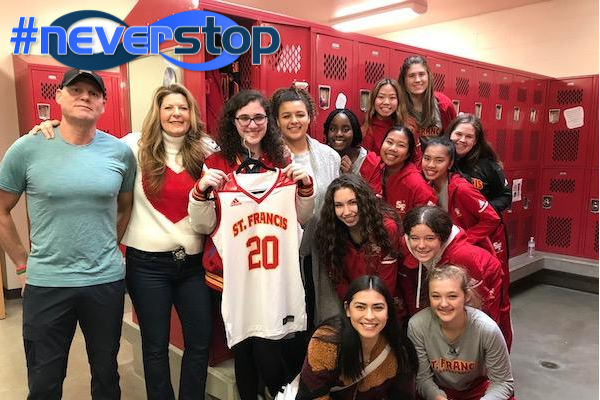 Nothing Was Going To Keep Hannah Malek Away From The Game Of Basketball — And The St. Francis-Sacramento Program Was Made Richer Because Of It •

If you’d told me I was going to be a varsity athlete when I was a kid, my family and I, my grandparents, my dog, and anyone or anything else in the general vicinity would have looked at you like you had five heads. Not Hannah Malek, that gangly, awkward kid who’d just finished treatment at Shriners’ Hospital. The one who couldn’t tie her own shoes or hold her pencil without help.

Every year, my mom would ask me if I wanted to try a sport: volleyball, soccer, swimming, absolutely anything that would get me moving and trying something new besides hiding behind a book. The answer, of course, was always no.

Then one of the boys in my middle school class spent a couple of recesses teaching me how to shoot a free throw — which, let me tell you, took some patience — and I decided to give this basketball thing a shot. Make no mistake, I was the worst person on the team, and I don’t say that self-deprecatingly. When your first basket is celebrated with balloons and cupcakes, you aren’t likely to be the next Breanna Stewart. And that’s OK.

But I couldn’t believe how much I loved the sport.

Even as my middle school career progressed and my minutes shortened, I loved the sport as much as breathing.

A young Hannah Malek with casts on both feet to treat her Idiopathic Toe-walking condition. (Malek family photo)

However much time I got on that court would be worth the pain and tears later when I had to treat my already tight muscles and the silver dollar-sized bruises that seemed a permanent addition to my arms and legs. There were moments when I wanted to sit down and cry because I still couldn’t tell my right from my left, let alone remember that one set of footwork I’d been trying for a week.

However, every hour of frustration in practice was worth the single second of joy when I would finally get it right. I am still grateful for my coaches who were willing to stay with me and walk me through the same drill over and over again — and even more for my teammates. They supported me even when it meant having to learn a second version of a set of plays to help me out, or nudged me in the right direction during a game.

I knew that I wasn’t going to play in high school, though. There’s a bit of a tip-off when you’re 17th off the bench in the summer try-out season. When my coach told me I was being cut, she teared up. Even though I knew it was coming, I did too. However, I’d talked to my mom and I was prepared.

I wasn’t going to lose something I loved without a fight. So, I did the only realistic thing left for me: I asked her if the team had ever had a team manager, and if I could be one.

I was nervous and had no experience managing — so I couldn’t believe it when she said yes. As I walked out of the meeting, I immediately looked up how to do basketball stats. I read articles, checked different charts, and put together a kit. During the jersey ceremony, I received a coaching jacket, and I would wear it to every game. Until the day my coach told me to get a jersey. Then I wore that, even when I knew I wasn’t going to play. I was still the manager, but now I was a player-manager.

My number was 25, and I wore it with pride. I had earned it, even if it wasn’t in the same way everyone else did. For the rest of my freshman and JV season, I was last off the bench, playing approximately 15 to 60 seconds each time.

Listening to my teammates on the bench when I got to go in, one would think an all-star had stepped up to the scorer’s table. Their reaction to any of my awkward two-pointers sounded like I’d made a buzzer-beating half-court shot. They never tore me down, and that is something I will always look back on with wonder.

Going into my varsity season, I knew I wasn’t going to get a jersey, and I was OK with that. My freshman coach, the same one who had started me on this journey of statistics, was going to be my coach again. I still had my teammates and the manager job that kept me with the game I loved. While I knew that the statisticians for varsity teams didn’t get varsity letters, I still felt like an important part of the team.

That’s why I couldn’t believe it when my coach handed me one at the end of the season. For my 17th birthday, I got my letterman jacket, proudly embroidered with “Manager” where my teammates put their jersey numbers. I was ready for one last season doing my job, whatever challenges lay ahead — and there were challenges, but the team rallied together.

The team was a family, and I loved it. It didn’t matter if I had the occasional late night trying to evaluate the stats of another team, writing up a game breakdown for my coach, or updating my own team’s stats. This was how I earned my letter, and I wasn’t going to let my coach down now. That varsity jacket was more than a piece of clothing. It was a promise to my team, my superhero cape, and a gift that I never thought I’d get. I couldn’t let it go to waste.

When my senior season started, I couldn’t believe that there was anything that could make it better. I loved the team and I loved my work. So, when my coach asked me to come in and work an extra shift at the tournament my high school was hosting, I put on my varsity jacket and got ready for work. When I got there, my whole team was in the locker room for an impromptu meeting. I sat down to listen with them.

My coach told them that we needed a refresher on what a good teammate was. I wondered what they’d done in the one practice I missed to earn a lecture about that. She said a good teammate was committed, devoted, selfless, passionate, supportive, had an incredibly high basketball IQ, and “a massive amount of heart to overcome anything that comes their way.” She said something had been missing from our team, and that she and our assistant coach had decided that there was one piece missing that would make our team whole: Having me in a jersey.

I couldn’t believe what she had said. I truly thought I was still dreaming in my bed until I was holding my jersey (No. 20), sobbing, and hugging my coach and teammates. I made my varsity debut on Senior Night that following Monday. The time on the court was, obviously, very brief.

Hannah Malek holds up her No. 20 jersey as her St. Francis-Sacramento teammates beam with happiness for her. (Malek Family photo)

When our season finally ended, I didn’t want to take that jersey off. I’m not sure why. Maybe some part of me felt that if I kept it on, nothing would end.

But, as I’ve realized in my life, the end isn’t always the end. Sometimes it just means starting a new chapter. I’m not going to play on a court again, most likely, but my passion for the game isn’t going anywhere. It’s a part of me, just like these memories and lessons are — all of which were worth the struggle.

I wouldn’t be the person I am today without my teammates, my coaches and the game that brought me to them. I cannot believe how far I’ve come, and I know I can’t wait to see where basketball takes me next.

Girls BasketballHannah MalekMPSt. Francis-SacramentoTicker
← Previous Story From Callero To Zuardo | One Coach’s #NeverStop Thanks To His Mentors
Next Story → Ben Dillard, Oak Ridge Swimmer – What Would’ve Been 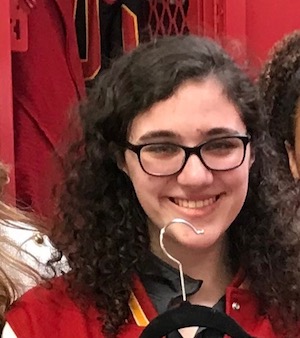 Hannah Malek just completed her senior year at St. Francis High in Sacramento where she served as a girls basketball player-manager for four years. Hannah’s love for basketball has helped her endure through a variety of physical ailments that included Idiopathic Toe-walking stemming from overly-tight muscles, Femoral Anteversion which causes an irregular gait, and Gross and Fine Motor Delays which can result in delayed reactions and low spatial awareness. She will continue her education at Saint Mary’s College as an English major and hopes to stay involved in basketball some way or another.