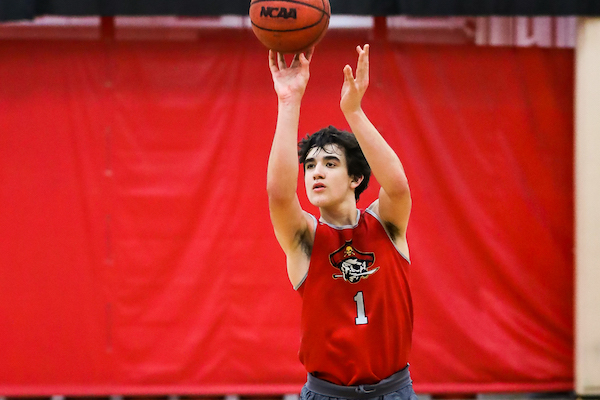 Tabbed By One Evaluator As “A Magician,” Isa Silva Leads A Promising Marauders Roster That Has Jesuit Aiming For A Return To Sac-Joaquin Section Elite •

Two months, three states, two countries. With that track record, you could say Isa Silva is getting used to flying across the country.

This past summer, the talented Jesuit High School point guard boarded a series of flights, flying back-and-forth between Los Angeles and Carmichael playing for the 17-and-under Compton Magic team, which reached the Adidas championships this summer. In June, Silva packed his bags and traveled to the section 17 basketball camp in Arizona with his team. In July, he took trips to Alabama and even spent time in Columbia as part of the NBA’s Basketball Without Borders tour.

“That was really cool,” Silva admits. “We got to help kids and play with kids from ethnic backgrounds and teach them the game. So it was definitely a busy summer, and I’m excited to be back in school and be with the team.”

Isa Silva is also used to flying around the basketball court.

The junior has made a name for himself on the hardwood as one of the region’s top 2021 recruits. Right now, he has offers to play basketball at Xavier, Colorado, USC, Vanderbilt, Arizona, TCU, Stanford, Fresno State, Santa Clara, UTEP, UC Irvine, Utah, UC Davis and Montana.

When asked about Silva, one evaluator said, “He’s a magician.”

The 6-foot-3 point guard has the sleight of hand to confuse defenders. He can poof and vanish to the hoop, leaving everyone in the dust. Last year, he displayed some of those tricks as he led the Marauders in scoring with 21.5 points per game.

His game is just as unique as his story.

Both of Silva’s parents were born in Mexico. They helped him discover his love for basketball, so he understands the importance of taking the game internationally and giving back to those less fortunate. He said his heritage also gives him an edge.

“Being a first-generation (American) gives me a chip and a mindset to go out and get whatever I want,” Silva explains. “Hopefully that toughness can help this team win this year.”

Silva is one of five key returners for a Jesuit team that reached the quarterfinals of the Sac-Joaquin Section Division I playoffs last year. And Silva is the key cog in the team’s chance to make a return trip.

Isa Silva works on his jumpshot during an early-November practice.

“As good as he is, and as much attention as he gets, he’s still a junior in high school,” Jesuit coach Tim Kelly points out. “… So (the next phase) for him is learning to control the game in its entirety.

“Some of that’s teachable, some of it’s natural, a lot of it’s natural. We watch a lot of film, with Isa in particular. And we talk to him about the flow of the game, and I think that’s the next evolution of his game — starting to recognize when we’ve had two or three bad possessions in a row and how can he settle us down, or when it’s his turn to put his foot on the gas a bit.”

Silva credits Kelly and the coaching staff for his development. Through practices, film sessions and one-on-one meetings, he said they helped him find what he calls Zen balance.

“It’s finding that balance, but staying aggressive,” he explains. “That doesn’t mean I’m forcing it, it means I’m in the flow. I think if I can control that flow, that dictates our team’s flow and they can feed off my energy.”

Silva needed a few seasons to discover that.

He recalls his team’s February playoff loss to Oak Ridge-El Dorado Hills as the last time he struggled to stay aggressive throughout the game. When the Trojans sent double-teams his way, he gave the ball up. But his team lost by four and he still feels like he could have done more to impact the outcome or put his team in better positions.

“Last year, this year and hopefully for the rest of my high school career, (they’ll double-team me). It’s a compliment,” he adds. “The other defense is focused on you. So you have to figure out new ways for you to dictate their tempo, and not to let them dictate yours. I think that game was one of those games where it was hard for me to figure that out.

“That was definitely one of the most painful losses I’ve ever had because I feel like I could have had that balance earlier. But just learning and taking that adversity the right way is something I’ve learned about playing the point guard position.”

Silva said losses like that are road bumps and an intrinsic part of the process of ultimately getting better. He embraces that and welcomes more challenges. The most recent being a physical rebounding drill.

“I think last year was a good lesson,” Kelly said. “When games really matter in the playoffs, and games get tough, it’s going to come down to defensive rebounding. I don’t think that’s changed in basketball since the start of basketball. It’s not always fun, it doesn’t make it on highlight tapes or Instagram, but it’s what helps you win. So I hope our guys are buying into that.”

Kelly has a unique situation this year: Everyone on the team is already at practice. Unlike years past, the team can field a full squad from the start of camp instead of waiting for other sports to conclude.

“We have a really, really good group of guys, and we pick each other up when someone gets down,” senior Kyle Anderson adds. “It’s not just Isa Silva or Jack (Andre) or Chris (Holley), it’s all of us. We have great chemistry and it’s a fun group.”

“We break every huddle with the word ‘together.’ It’s what we say all the time. If we’re going to be any good, it’s going to be together,” Kelly added.

The Jesuit basketball team breaks from practice for a group photo.

Kelly moves into his second season at the helm of the program. He said his team bought into his coaching philosophy from day one, and even though that 2018-19 season came to a halt in the playoffs, he was proud of the progress the team showcased.

“A lot of things went right for us last year, and those seniors were great,” Kelly recalls. “Of course, it’s tough to lose in the playoffs, but I don’t want to shortchange anything Oak Ridge did. They were a really good team, they have good players and were really well coached. They came into our gym and beat us, so there are lessons there.”

The Marauders also play in one of the best leagues in the section, said Kelly.

“Each night in our league is a challenge. There are no nights off, and it doesn’t matter who you’re playing,” Kelly said. “So it’s a fun league to be in.”

With Silva and fellow underclassman Chris Holley in the backcourt, Jesuit has the firepower to keep pace with top programs like Sheldon-Sacramento, Folsom, Grant-Sacramento and others.

Jesuit senior forward Kyle Anderson will be among the Marauders’ defensive leaders in 2019-20.

“My role on this team is to facilitate, get everyone the ball and get hyped on defense,” Holley said. “It’s not just scoring, and there is some pressure on Isa and me to score, but I also need to get everyone involved.”

Holley and Silva will facilitate the offense, while seniors like Anderson and Jack Andre will lead defensive efforts.

“My role is to be a quarterback and let my team know what defense we’re in,” Andre explains. “I also have to plug gaps, get in passing lanes and stop post entries. A big part of it is communicating where we need to be, what’s on the opposite side and helping my teammates.”

Kelly knows this could be a special group that has the chance to make a run in the playoffs.

“The talent is there and the unselfishness is there,” he said. “So it’s possible… Wins are really hard to come by, and there’s a lot of really good teams around here with a lot of talent. So I don’t think it’s fair to our team if we overlook any game on our schedule.

“So we’re going to keep our heads down and work really hard and at the end of the year, we can pause to look back and celebrate, hopefully.”