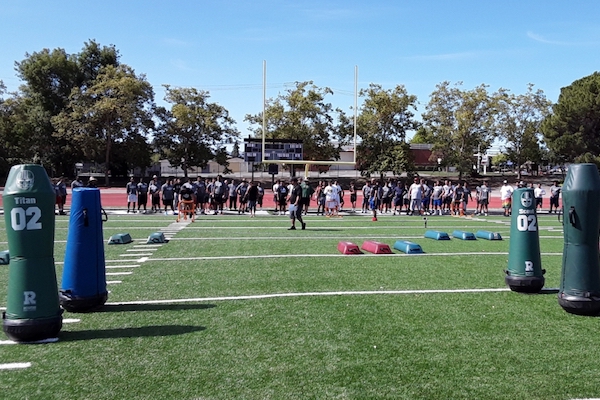 Impressive Collection Of Talented NorCal Linemen Gather For A Spirited, Competitive — And Even Emotional — Battle Of The Unsung Heroes •

It was an impressive gathering of arguably the best collection of offensive and defensive linemen throughout NorCal.

The event includes a team competition and an individual lineman challenge. SportStars also presented an obstacle course challenge for the second consecutive year.

Members of the Clayton Valley-Concord football team pose together at the conclusion of the 2019 JPS Ultimate Lineman Challenge.

In the team competitions, Stag Elite was the Open Division champion while the Nor-Cal Outlaws were the runner-up. Hayward High was the Select Division champions while Skyline-Oakland took second.

Members of the U.S. NAVY attended the Ultimate Linemen Challenge to address and interact with the players.

JPS also debuted a new award for 2019 in honor of the late Tui Talia. Talia was a standout defensive lineman from Ygnacio Valley-Concord who went on to excel for the University of Oregon in the 2014 and 2015 seasons. The 25-year-old passed away as a result of injuries sustained in a drunk driving accident less than a month ago. He was a backseat passenger and not wearing a seat belt.

The Tui Talia Ultimate Warrior Award was conceived to go to a lineman that best represented Talia’s tireless work ethic and strong character traits. In an emotional presentation, coaches named Mana Taimani (Clayton Valley-Concord) the first recipient. Taimani is in fact a close cousin of the late Talia.

The JPS-provided video below showcases highlights of the action and the full presentation of the Tui Talia Ultimate Warrior Award.

For more information on JPS, including its Paradise Football Classic all-star event in Hawaii, visit the organization’s home page.

Players and coaches kneel in prayer while remembering Tuli Talia.

The awards table featuring the Tui Talia Award and the ULC Championship belt.

A look inside sponsor goodie bags that went to each player.