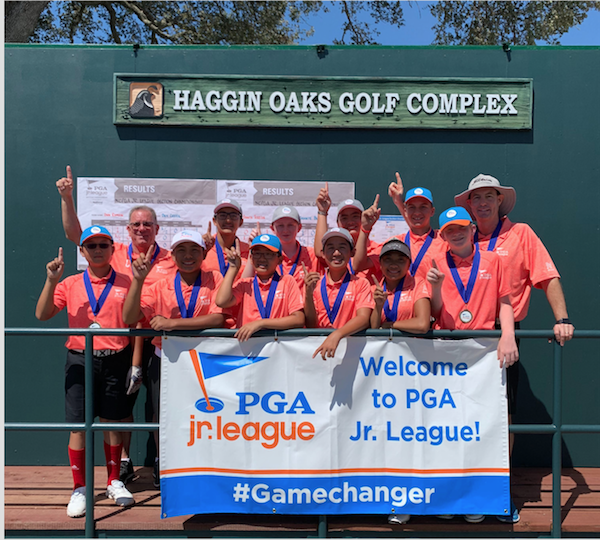 Below are the final results, along with the team roster denoting returning players.

The San Ramon All-Stars (a co-ed team of junior golfers, ages 13 and under) won the Nor Cal PGA Jr. League Section Championship. The event was presented by National Car Rental Aug. 17-18 at Haggin Oaks to advance to the Regional.

They will compete against three All-Star teams from Scottsdale, AZ, Encinitas, CA, and Kapolei, HI, for the opportunity to advance to the PGA Jr. League Championship at Grayhawk Golf Club in Scottsdale, Oct. 11-14.

All-Star teams competing in the Regional at PGA National include:

Following the regular season, 10-player All-Star teams are formed from a combination of players in each league.

Teams move through Section Championships in August to earn a spot at one of 12 Regionals held across the country in September. Twelve Regional champions advance to the PGA Jr. League Championship presented by National Car Rental, which has been held at Grayhawk Golf Club since 2016 and will stay through 2022.

PGA Jr. League brings boys and girls together to learn and play golf on co-ed teams, all with expert coaching from PGA and LPGA Professionals. Kids wear numbered jerseys and play on teams with friends, competing in a two-person scramble format that builds confidence and encourages sportsmanship. While the focus of PGA Jr. League is primarily on the recreational nature of its spring, summer and fall seasons, the PGA Jr. League Postseason presented by National Car Rental presents competitive golfers a fun and aspirational finish to regular season play.

The PGA Jr. League Postseason presented by National Car Rental is designed to celebrate the regular recreational season held in April through July, and reward players who have given their best effort and improved during the regular season. As a premium, internationally recognized brand serving the daily rental needs of frequent airport travelers worldwide and the Official Partner of PGA Jr. League, National Car Rental is committed to growing future business leaders by growing junior golf.