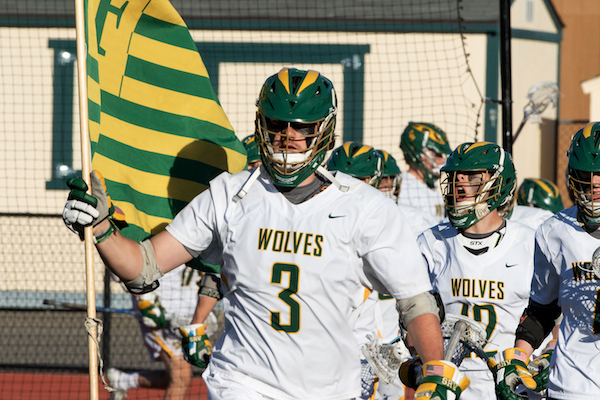 In Their Final Game Together, Eight Exemplary Seniors Led San Ramon Valley To Its First Boys Lacrosse Section Title Since 2015 •

In the end, for the San Ramon Valley High boys lacrosse team, it was all about “this one.”

The “one” on May 17 was big: the North Coast Section Division I boys lacrosse championship, courtesy of a 15-7 victory over De La Salle-Concord.

With the team slogan of “this one” visible around the San Ramon Valley field, particularly on the backs of its coaches’ T-shirts, the Wolves played as one to capture their first championship since 2015 and fourth overall in the sport over an 11-year span.

“Our motto this year was “this one” … every single time. This ground ball. This face-off. This play.

This pass,” said senior co-captain Drew Erickson. “And we took it one thing at a time. And we came out on top. I’m really proud of my teammates and it’s just a great way to end the season.”

Erickson scored three of his game-high five goals in the early going.

That was a huge start for us!

“That was a huge start for us,” Erickson said. “Usually we start a little bit slow. We played really hard in the first quarter.

We had a little bit of a lull in the second quarter but we brought it back and we carried the momentum through the second half.”

The energy level was on max speed for San Ramon from the outset, drawing mighty roars from the home crowd.

“Our guys were very energized and enthused,” Wolves coach Mike Kruger said. “They did a good job of channeling that into execution and making the right plays.

I thought we were great on ground balls in the first quarter. We handled the ball well. We stuffed the shots when we had them.”

The Spartans (18-6)  clawed back with scores by Justin Barton and Travis Wheeler to trail 8-2 at intermission.

However, they closed to 11-6 with a score by Mike Balousek with 10:34 left in the match. Finally, successive goals by Quinn Marquez and Zack Romrell (who each finished with three scores) — and two straight by Erickson in the closing 2:33 — sealed the win.

“It was a little pressing when they started coming back, but we tried to get back to how we started out,” senior co-captain and goalkeeper Cole French said. “To get back to that first tempo we had to carry it throughout the whole game. And I thought we did that toward the end.”

French, who had six saves, as always had great faith in his Wolves defenders.

I have so much trust in them.

“I have so much trust in them,” French said. “They do so much for me. They keep it to outside shots. So I can trust them with anything. I let them press out because I know they will get takeaways.”

The Wolves’ eight seniors took it upon themselves to speak to the rest of the team in the final practice on the eve of the game.

“There are only eight of them, so it’s a small class,” San Ramon Valley coach Mike Kruger said. “Those guys have been playing lacrosse together, back to the (Diablo Scorpion Lacrosse Club), for 8, 9, 10 years together.”

“They started their career here with a championship. And this was their first year back to it. You only get as far as your seniors take you when you get late in the season. They took the team. They all talked in practice last night about what it meant to them. I couldn’t be more proud of them. They are an incredible group.”

This Wolves team, which finished undefeated against NCS foes — its only losses were to Bellarmine Prep-San Jose and Arapahoe-Centennial, Colorado — now says goodbye to those eight seniors.

But there will be a bit of a Wolves reunion … in Denver. Erickson and French move on to play at the University of Denver, where French’s older brother, Austin, plays. And Wolves junior Marquez will head there in a year.

But for the fans in Danville, this senior group left a big impression.

“They always operate with class. Each are great students. They are great people in the community. And they are at Scorpions practice coaching the youth players. They are what makes the program special.”