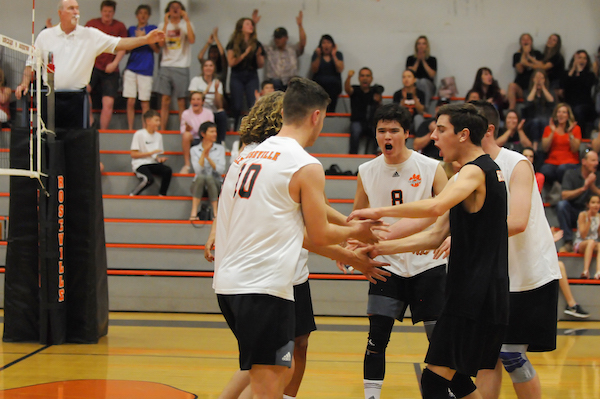 With Golden Sierra-Garden Valley earning a No. 6 seed in Division III, the Grizzlies are the defending section champion with the best shot to repeat. Div. I defending-champion Whitney-Rocklin failed to make the playoffs, and Div. II defending-champion Del Oro-Loomis is seeded No. 14 in a deep field of contenders.

Here’s a quick glance at all three divisions.

With enrollments changing and new league champs emerging, the path to the title will be different, but the Granite Bay Grizzlies appear to be the cream of the crop. Winners of a section-best five volleyball titles (in 10 years of SJS playoffs), the Grizzlies will remain on top of the section titles board.

THE FAVORITE: Granite Bay (28-2). The Grizzlies are led by standout senior outside hitter J.T. Demure and are solid to spectacular at all positions. Their only loss to an SJS opponent this season was to Foothill Valley League champion and Division II top seed Nevada Union.

CONTENDERS: Elk Grove (18-6) and Jesuit-Carmichael (28-5) earned the No. 2 and 3 seeds, respectively. The Thundering Herd shared the Delta League title with Jesuit, and will rely on superstar outside hitter Ian Smith to work for the program’s first section crown. Smith’s gaudy hitting stats are hard to believe, but he has carried Elk Grove in most matches this year. The Marauders have suffered some late season injuries. If healthy, they may still be a legit title threat. They are a young team, though, and regardless of this year’s results, should be considered a favorite to win a 2020 crown.

DARK HORSE: Rocklin (16-7). The Thunder will have a tough road potentially facing Roseville, Granite Bay and Elk Grove or Jesuits. But they battled every week in the Sierra Foothill League, and have one of the most gifted attackers ever to play in the SJS: Pepperdine-bound outside hitter Shane Atkins.

A perennial Div. I contender, Nevada Union earned the No. 1 seed in a field flush with competitive teams that could catch lightning in a bottle.

THE FAVORITE: Nevada Union (24-2). The Miners’s only SJS loss was to Granite Bay after beating the Grizzlies 3-0 earlier in the season. They would be a contender in Div. I, but are the clear favorite in Div. II. Junior Preston Nowak and senior Jordan Mills have led the way throughout the season for Nevada Union.

CONTENDERS: Vista del Lago (22-2) and Placer-Auburn (23-15). The Eagles claimed the Capital Athletic League title with a veteran lineup that includes five seniors. Pierce Rexford and Noah Silva are the top attackers, but Vista has a full arsenal of weapons. The Hillmen lost only to Nevada Union in league play, but senior Jarod Robles leads a group of four attackers that could get hot.

DARK HORSE: Lathrop (26-2). The Spartans cruised to a perfect Western Athletic Conference record, but lacked a true signature victory. Lathrop was swept by Jesuit in tournament play, but the duo of Tyler Riggleman and Gabriel Gutierrez give the Central Valley’s upstart program a chance at shaking up the bracket.

Ripon Christian’s win over Lathrop in the season’s final match likely vaulted them to the top of the divisional seedings. But the Knights may not be the team to beat.

THE FAVORITE: Bear River-Grass Valley (22-5). The undefeated Golden Empire League champions are just two years removed from abandoning their season due to the departure of their coach midway into the schedule. However, the Bruins are perhaps the most intriguing team in the division. Breakout sophomore outside hitter Jace Rath is just one of several talented, athletic players that could yield multiple championships for Bear River.

CONTENDERS: Ripon Christian (17-2) and West Campus-Sacramento (14-2). The Knights were undefeated in Trans Valley League play and have 6-foot-8 senior outside hitter Cade Alger to wreak havoc on the field. Junior Sam Waituruturu is solid at all positions, but usually leads the Warriors from the setter spot. A strong senior supporting cast could help West Campus go on a deep playoff run.

DARK HORSE: Golden Sierra (18-15). As defending Div. III champs, the Grizzlies know how to win a championship. They return a number of players from the championship team, including outstanding senior setter Lucas Larsen.