Clemmens on the MLB Hot Stove

By Blaine Clemmens; email me at BayAreaWS@yahoo.com or Tweet me @BayAreaWS

With National Letter-of-Intent week gone by, the MLB Hot Stove season (though even Luke-Warm-Stove seems like a stretch as of this writing), and Thanksgiving providing us a time for reflection, I started to think of all the former Bay Area World Series (BAWS) participants who have reached professional baseball.

Many of them went to a four year school before signing a professional contract, so NLI week was a very important part of their journey. Many of those players are certainly now monitoring the Hot Stove and rumors that include them, while others have been added to 40-man rosters.

I’m thankful to have had the opportunity to watch them compete as high school players and follow their careers from a distance.

Many of you reading this are also likely avid fantasy football players, so with the fantasy football playoffs just around the corner, the “intensity” of that game is increasing this time of year as well.  It had me thinking of a fantasy line-up made up of former BAWS participants now playing professional baseball.  There have been 29 former BAWS participants reach the Big Leagues and over 200 (last count was 208) former participants who have been drafted or signed free agent contracts.  Northern California is fertile ground for producing professional baseball talent and many showed off their talents at BAWS.  In fact, no other local showcase has seen that many future professional players as participants.

Kudos to Cal… this “team” is littered with former Golden Bears.

With 29 Big Leaguers, I’ll stick to that group for this BAWS Fantasy Team.  Here we go.

What stands out about this group is that all three of them are from the Sacramento area.  Quite impressive, and also interesting is that Stassi and Susac were both 2009 grads and in scouting circles (including me, as I was the area scouting supervisor for the Braves in 2009) they were compared to each other since about the time they were each 14 years old.  Knapp is a 2010 high school grad, so there were three future MLB catchers in that area in those two years.  Susac reached MLB with the Giants and earned a World Series ring in 2014 as the back-up to Buster Posey.  Stassi will receive a ring from the Astros World Series title this year, though he was not on a playoff roster, he did make key contributions during the season.  So far I feel as though his career has been the most significant of this group, though Knapp could certainly prove me wrong as he continues with the Phillies.

Kobernus was a tremendous all-around athlete and played more of a utility role as a professional player.  He is now retired.  Kelly spent a nice chunk of time at the MLB level with the Phillies this season, playing 2B, 3B, 1B, and all three OF positions.  He hit over .200 with a couple of dingers.  Renda broke through with the Reds in 2016 and is currently in the Diamondbacks organization.  Kelly has proven to be a useful utility player and Renda still has a chance to carve out a role going forward, but I think given his career accomplishments thus far, I’ll go with Kelly, a participant at BAWS I and BAWS II.

Dickson is a great feel good story.  Coming out of GWHS, then heading to College of San Mateo, finishing up at SSU, then playing professionally in the minors and foreign leagues for six seasons, his journey is one of perseverance and tenacity.  He finally got his shot with the Dodgers in 2017.  Davis path and career arc is a bit more traditional, as a highly recruited HS player, attending a major college powerhouse, being drafted in the 3rd round, spending a few seasons in the minors and this year arriving in the Big Leagues with the Astros.  He hit quite well too, with four homers in 62 at-bats and will receive a World Series ring for his contributions during the season.  Down the road I’d imagine he’s going to have to move to 1B and learn the OF to keep a role with the Astros, but he’s our pick on this team.

He’s the only former shortstop among former BAWS participants to reach the Big Leagues and not only that, he’s the starting shortstop for the A’s.  In his five seasons at the MLB level, Semien has hit with power and is improving a an overall hitter.  He’s stolen some bags as well.  He battled injuries last season, otherwise it would have been his third season of ove 600 plate appearances.  In a past ranking I did of the top former BAWS participants to reach MLB, I’ve rated Semien as the best.  Pretty easy considering he’s a starting shortstop and there are only 30 of those in the WORLD. 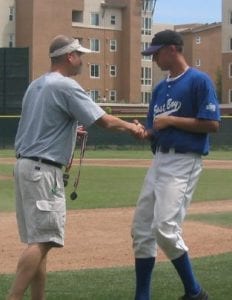 Stephen Piscotty gets his award at BAWS 2007

That’s an impressive list of players.  Four of them were 1st round selections and had Pederson not been committed to USC, he would have been drafted much higher than the 11th round.  In fact, he signed for what amounted to about 3rd round money.  Goeddel was committed to UCLA, so when you consider the schools these kids signed with, they are not only a talented group of players, but also really intelligent!  Thus far I’d say Piscotty has had the most significant career, but Haniger has an everyday role with the Mariners and we know of Pederson’s impressive accomplishments, including finishing second in the home run derby and playing a VERY significant role in the Dodgers run to the World Series.  Jackson was the first former BAWS participant to be drafted in the 1st round and after a rapid climb through the minors, he just couldn’t sustain a career at the MLB level, due in part to struggling to make consistent contact.  Goeddel was a Rule V draft pick by the Phillies from the Rays and played 92 games in 2015.

Since this is a fantasy team of sorts, I am not going with a traditional five man rotation.  A couple of these players have undergone significant surgeries (Erlin, Ross) and need to re-establish themselves, while Flexen made a big jump from AA to the Big Leagues this year with the Mets, due in large part to all the injuries with that team.  He’s done quite well in the minors but was rushed to MLB out of necessity.  Stephenson started to really come on at the end of the year for the Reds and though I am not confident that he’s going to stick around as a starter, he has started to figure out how to make his quality stuff work at the MLB level.  Johnson (White Sox/Padres) and Cravy (Brewers) have both been up and down a number of times, but just haven’t been able to be consistent enough to stick for long periods.  Of all these players, Ross has been the best performer at the MLB level and had he not been injured, would be counted on as a member of the Nationals’ rotation for 2018.  Erlin was looking like a back-end rotation contributor until his Tommy John surgery.

This group is pretty strong.  By far the most accomplished player is Bryan Shaw.  He’s been a mainstay in the late innings for the Indians for a number of years and this season he is getting a lot of interest as a free agent and it is conceivable that he gets a shot as a closer in 2018. Interestingly enough, Shaw gave up the runs that ended up being the clinching runs for the Cubs’ World Series title.  I am sure he’s not thrilled with that, but the point is that he was on the mound in Game 7 of the World Series because he has earned that respect at the MLB level.   Barraclough has also carved out a back end of the pen role with the Marlins and will enter spring training competing for the Marlins’ closer role.  His strikeout rate has been ridiculous at the MLB level.  Hollands had a nice thing going with the Phillies until arm issues and surgery derailed his career.  Martin (Mariners) and Marshall (Mariners, Diamondbacks) both have been up and down as middle relievers for the last couple of seasons.  Floro has been up and down with the Rays and Cubs, while Graham had a pretty sizable opportunity with the Twins in 2016.  I’ll go with three of them, kind of how many players do with an actual fantasy baseball team.

Player pool: All hitters who didn’t get selected for their position

Andrew Knapp is the pick here.  He’s a switch-hitter and has shown the ability to hit at the MLB level with the Phillies.  There is a chance he is the starter in 2018 and certainly looks like no less than the back-up catcher.

So there you have it. That was fun!

There are plenty of others working their way through the minor leagues and a few of them are really well thought of in their organizations, in particular OF Braden Bishop (Mariners), SS Drew Jackson (Mariners), 3B Lucas Erceg (Brewers), and INF Alex Blandino (Reds).

Enjoy the holiday season, we will catch up sometime in December. If you want to hear my thoughts or get my insights about something you are interested in, feel free to email me at BayAreaWS@yahoo.com or Tweet me @BayAreaWS

Blaine Clemmens is the founder of the Bay Area World Series baseball showcase events, which turn 15 years old in 2018. He is a former Northern California scouting supervisor for the Atlanta Braves and former pitching coach/recruiting coordinator for USF and Solano College.