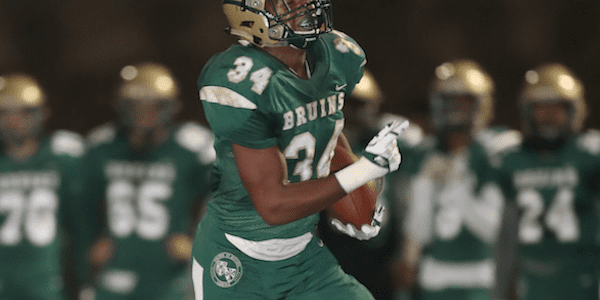 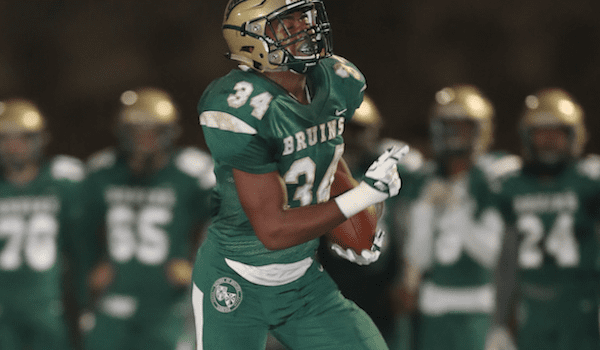 An NCS Division 5 semifinal matchup between the defending Div 6-A state champs St.Patrick-St. Vincent Bruins against the Clear Lake Cardinals here in Vallejo, CA.  I came here to see this Tongan student-athlete, #64 Magnus Santos, a 6’4”, 285 lb freshman DT who was promoted up to Varsity for the playoffs. He has football lineage in him as his maternal uncle Oti Pahulu won a Rose Bowl with UCLA in the mid80s. The St. Patrick-St. Vincent team is led by #34 RB Marshel Martin and #8 QB Akil Edwards. Martin is a 6’2” 210 lb running back built like NFL RB Adrian Peterson but who runs like Eddie George, a 1995 Heisman RB from Ohio State. He is getting looked at by UNLV and San Jose State. 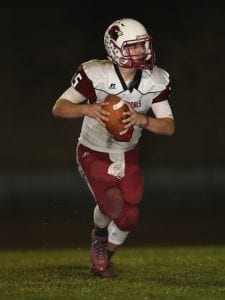 On the other side of the ball is the Clear Lake Cardinals (Lakeport, CA) led by their ferocious leader, #5 QB Alex Adams who at 5’10” and 175 lbs is the heart and soul of this team. Notable alumni from Clear Lake HS is Ronnie Cruz who played 3 years in the NFL for the Kansas City Chiefs — he was the fullback in the early 2000s opening holes for RB Priest Holmes. The team has been playing with a heavy heart this season as their Defensive Coordinator Robert Rumfelt died in the line of duty this past August. They commemorated their coach by bringing their flag to every game. They have earned the right to be here to play the #1 seed St. Patrick-St. Vincent Bruins.

With the Bruins on offense to start the game, on 2nd down #34 Martin gets the handoff and he’s off to the races for a 70 yard TD run. As the Bruins kick off to Clear Lake, #21 Rodrigo Lupercio has a nice solid return for 32 yards. Two plays later, #5 QB Adams throws a lob to Lupercio on one-on-one coverage and he is in the end zone for a 53 yard TD pass. It is 7-7 with 10:35 remaining. It looks like this is going to be a high scoring football game.

The next Bruins possession- they are on the goal line 6 yards away, on 1st down Martin carries it for 5 yards. The next play, Martin gets the carry and runs over the defender to get the TD. Martin sure can run and sure can hit. 2 point conversion fails and St. Patrick-St. Vincent is leading 13-7 with 7:15 remaining in the 1st quarter. 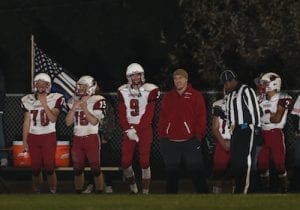 The next possession for the Bruins, #8 QB Akil Edwards runs a QB sneak for a TD from 59 yards out. The 2 pt conversion fails.  The team is up 19-7. On the next drive for Clear Lake, #5 QB Adams scrambles for 15 yards on a broken play. The next play Adams scrambles with so much time in the pocket and finds #33 WR Erik Valadez for a 25 yard TD. Clearlake closes the gap at 19-14 with 26 seconds remaining in the quarter.

Starting the 2nd qtr for the Bruins, #8 QB Edwards throws a 29 yarder to #1 WR Kailon Johnson-Loud. Next play Martin has a 30 yard touchdown run by breaking a couple of tackles along the way. I am loving this kid. Score is 26-14 with 11:27 remaining. The next Bruins offensive possession Edwards throws a 33 yard TD reception to #3 WR Murvin Kenion as the Bruins continue to build their lead to 33-14 with 8:55 remaining in the half. Things are getting tough for the Cardinals as #33 RB Erik Valadez fumbles the ball and the Bruins recover.  Two plays later, Martin has a 50 yard TD run and St. Patrick-St. Vincent goes up 40-14 with 5:36 remaining in the half. And that’s our halftime score.

In the 3rd quarter, there was a delay of game as #9 DB Charlie Rose for the Bruins was hit awkwardly on the punt team in a gang tackle. He was carted off the field to an ambulance with a probable concussion and neck injury. We hate to see this with our student-athletes especially when a team like is competing for CIF State Championship as playing a 16 game season (should they reach the State Championships). That’s a lot of football for a high schooler when player safety is on the rise in regards to concussions and if a student-athlete also plays a winter sport such as basketball, wrestling, soccer; they miss nearly 2 months of competition.

Following the delay of game, the Cardinals are driving towards the end zone led by their leader #5 QB Adams who refuses to quit.  RB Lupercio has a 2 yard TD and the Cardinals are down 40-20 with 4:57 remaining in the 3rd qtr. The Bruins await the kickoff. #1 RB Johnson-Loud returns the kickoff for 85 yards for a TD and the Bruins are up 48-20 just like that! But Clear Lake responds with a 31 yard TD run by Lupercio and a 2-point conversion to cut the Bruins lead 48-28 with 2:05 remaining.

At the start of the 4th qtr, the Bruins #8 QB Edwards sneaks it in for a 7 yd TD and they are up 54-28. The next Bruins possession, Clear Lake gets a break with an interception by #82 Austin Davis and the the Cardinals have excellent field position at the 3 yard line. On 1st down, Adams throws a fade route to the right to #82 Davis and he comes down with the ball for a TD! Bruins up 54-36 with 8:00 remaining.  What a game. St. Patrick-St. Vincent decides to put in the 2nd string on offense and the Bruins backups turnover on downs. The next offensive possession for the Cardinals, #21 Lupercio runs for a 43 yard TD as the 2 pt conversion is good. Clear Lake is closing now, down 54-44 and this team won’t quit. Eventually though, the Bruins put back their starters on offense and they succeed as #34 Martin runs for a 33 yard TD to increase their lead at 60-44 with 5:15 remaining. Clear Lake can’t do much on their next offensive possession. St. Patrick- St. Vincent runs the clock out… the final score from Vallejo is 60 – 44 as the Bruins advance to the NCS Div 5 Championship against Middletown,  the game will take place on Sat., Dec. 2 at Alhambra HS in Martinez.

My evaluation of #34 Marshel Martin (just barely turned 17) is that he’s a man amongst boys on the football field. Marshel is a power 5 running back and I know it is difficult for him to get the exposure he needs because he plays for a Division 5 school, though he has a bright future ahead of him. I wish nothing but the best for the 2017 St. Patrick-St. Vincent Bruins football team towards their run to state.

George is a football insider for SportStars. He's been involved in several projects promoting Tongan and Polynesian players in recent years. Pahulu's Point of View is his take from the most recent game he's attended.