Marcus Bagley lived up to his preseason hype.

Coming into the 2018-19 boys basketball season, Bagley’s addition to an already strong Sheldon High team made it one of the most explosive and most dangerous teams in Northern California.

The newcomer averaged 19.9 points and 7.9 rebounds. He helped the Huskies win back-to-back Northern Regional titles and play in the Open Division title game for the second straight year. The junior’s versatility and athleticism were on full display throughout their run.

“It means a lot to me to win this award. I am very honored,” Bagley said. “But it’s not really my award, it’s my teammates award, too. I wouldn’t have been able to do this without them.” 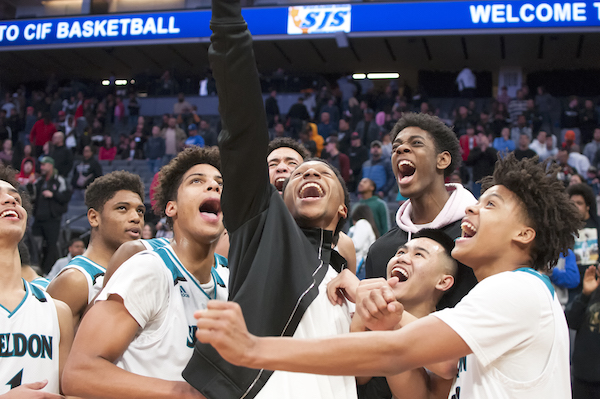 At 6-foot-8, Bagley looks like your typical low post player, but he’s all over the floor. In the CIF State Open Division Championship game against Sierra Canyon-Chatsworth, he was asked to guard Kenyon Martin Jr. in the post before switching back to the wing position on offense. He possesses the versatility to guard bigs and then pop out to the wing and hang with the guards.

That’s in part due to his roots. He grew up watching his older brother and Sacramento Kings rookie Marvin Bagley III. As the tallest player on the floor, Marvin was consistently asked to play in the post. But their dad, Marvin Jr. knew his boys could do more than just play the post.

So Marcus, who didn’t enjoy the same height advantage over his classmates as his brother, grew up playing guard, honing his skills as a ball-handler. He followed Marvin to Sierra Canyon for his freshman year, then moved to North Carolina while his brother went to Duke.

Marcus eventually shot up and surpassed many of his teammates, but he still has the skills of a guard.

“He was our most consistent player,” Rollings said. “And when he got hurt, other guys had to step up, which was a good thing for our team. He’s so strong with the ball and shoots it so well, plus he’s such a good kid. He listens and does what he’s supposed to. He never wants to come off the floor, even if we’ve got a big lead and we need him fresh for another game. That’s what you want in your best player.” 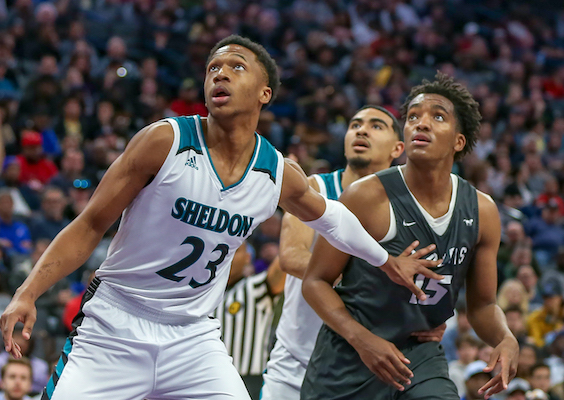 Bagley boxes out a member of the Sierra Canyon team during the CIF Open Div. state final. (David Gershon photo)

A national recruit, Bagley has interest from Cal, Pittsburgh, Arizona State, USC and UCLA and he’d like to make a decision as soon as possible following a few official visits to programs of his choice.

“This summer is going to be big for him,” Rollings stated. “He’s going to play point guard for his AAU team (MB3 Elite).”

Marcus hopes it is a permanent change to point guard.

“I’m trying to complete the transition to the point guard position, and become more of a leader for my team,” Bagley admitted. “I think leadership is one of the biggest traits point guards possess — it really goes hand-in-hand with the position. So I want to work on my game, tighten up my handle and become a better overall player.”

Bagley is a four-star recruit, but his coach says that may be because he sat out last season when his brother was playing at Duke and the whole family lived in North Carolina.

“He’s going to get a lot more offers and attention as the summer comes and next year rolls around,” Rollings added.

With Bagley returning next year for his senior season, Rollings and Co. have high expectations, and reasonably so. They’ll look to record a third-straight Open Division championship appearance, tying only Mater Dei-Santa Ana as the only programs to do that.