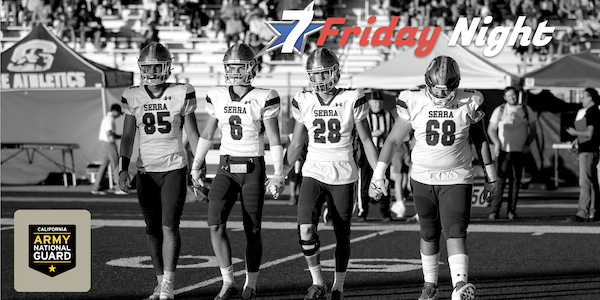 Serra 3-Star Lineman Ryan Silver Joins 7 Friday Night As The Padres Look To Beat NorCal’s No. 2 And No. 1 Teams — On The Road — Back-To-Back •

Hosts Chace Bryson and Ben Enos have a ton of talk about after a thrilling first week of football across all of NorCal. A primary focus is placed on Serra-San Mateo which traveled to No. 2 Folsom and gutted out a 17-12 win. Now, the Padres are the No. 2 ranked team and take to the road again Friday — to No. 1 De La Salle for a nationally-televised game on ESPNU. No big deal.

Actually, yes big deal! The show welcomes its fist player guest of the season, Serra senior Ryan Silver. The San Diego State-bound two-way lineman talked about what it took to earn the win at Folsom, and how the team is approaching its new challenge this week. (By the way, after this week, Serra faces current No. 6 Central Catholic-Modesto and then No. 5 St. Francis-Mountain View).

Coach Terry Eidson also makes his weekly stop to share his thoughts on last week, as well as his memories of coaching against Serra coach Patrick Walsh (his former player at De La Salle) and what he liked about playing in TV games.

• Padre Perseverance | No. 3 Serra Is All Grit In First Big Win — By Jim McCue