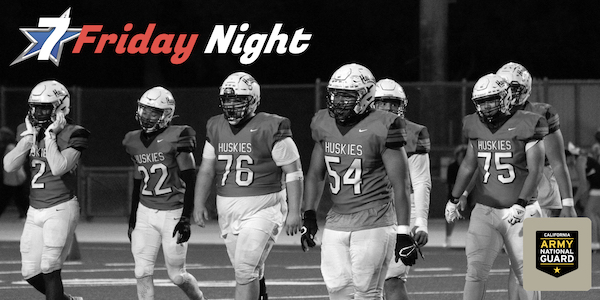 PICTURED ABOVE: Members Of The Sheldon High Football Team Walk Off The Field During Their Win Over Nevada Union. (Sheldon HS Football photo/Twitter)

After covering the big No. 1 vs. No. 2 showdown between De La Salle and Serra-San Mateo, SportStars editor Chace Bryson left town for a long weekend in Las Vegas — which left co-host Ben Enos slightly reeling as he attempted to keep the 7 Friday Night ship on course. However, Chace returned in time for the two hosts to have their weekly chat about all things NorCal football.

Serra bet on itself during the first two weeks of the season, and it has paid off with NorCal’s No. 1 ranking. Their comeback win over De La Salle is discussed, and the hosts also talk about some of the key themes from Week 3 (where a handful of gambles didn’t pay off for ranked teams). Also, to keep the theme going, Sheldon-Sacramento scores points like a slot machine that hit the 5x multiplier on the pay line. Huskies coach Chris Nixon joins the program to chat about the team’s fast start and its intersectional showdown against Acalanes-Lafayette this week.

Finally, Coach Terry Eidson makes his weekly drop-in. He shares his own thoughts on the De La Salle/Serra game and where each team may go from here. He also gives us all an update on the fantasy football team he shares with Pittsburg coach Victor Galli.