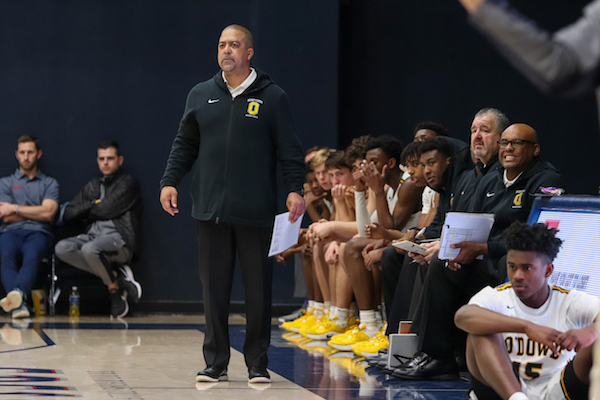 And then there were no championships. On the morning of March 12, the sudden CIF State Basketball cancellations brought the stark reality of the Coronavirus pandemic to the high school sports world.

The CIF announced it was shutting down the two-day event nearly 24 hours before championship games were to begin at Golden 1 Center in Sacramento. The decision came hours after the NBA shut down its regular season indefinitely. The NCAA followed it by cancelling postseason tournaments, including the eventual cancellation of both of its March Madness tournaments.

Emotions ran high at team meetings throughout California as teams tried to process it all.

“When you see your kids losing it, crying like that, it is really tough,” Bishop O’Dowd-Oakland girls coach Malik McCord said. whose team was slated to face Rosary Academy-Fullerton for the Division I championship on the first night of the championships. “We talked for an hour and a half. It went from a lot of tears and crying to a lot of positives.

“We ended up looking at other people who have it worse than us not having a state championship game. And we looked at what’s important: What about those people working in those arenas who have hourly jobs to get by on? But I am not going to lie … it was tough.”

The scene at Golden 1 Center on March 11, the night the NBA suspended its season. On the following day, the CIF cancelled the state finals scheduled for the same arena. (Paul Kitagaki Jr./ZUMA Wire photo)

“I’ve never lost to a pandemic before…”

“Dumbfounded was the feeling; there was more silence than venting, which I could understand,” Panthers boys coach Rich Buckner said. “I was at a loss for words, as I am now. It’s the right thing to do, to cancel this, for the safety and health of all of us.

“I’ve never lost to a pandemic before that ends our season. How do you explain that to kids? You don’t.”

After meetings with its Executive Officers, the CIF cancelled the full slate of championship games March 13-14, and two remaining regional finals. One of those regionals was an Open Division boys showdown between Sheldon-Sacramento and Bishop O’Dowd-Oakland.

“While we understand this decision is disappointing, we strongly believe that the opportunity to compete in this event does not outweigh our obligation to place the health and safety of our member schools and school communities above all else,” CIF Executive Director Ron Nocetti said in a media release.

Suddenly, teams ranging from six-time girls champions and Central Coast Section powerhouse Archbishop Mitty-San Jose to Oakland Tech — which emerged from the tiny Oakland Section to play for a chance at a second straight state title — were shut out of their season-long goal. Players with well-intentioned tunnel vision toward basketball suddenly had to reverse their lens to the broader national and world communities.

“This is bigger than basketball, and that the lessons they were learning, the lifelong relationships don’t end here,” St. Mary’s-Berkeley girls basketball coach Chris Toler said. His team would have faced Paloma Valley-Menifee in a quest to win the program’s first state title. “All of us are going to be here, God willing, and we have other things that are important still to come.”

For Sheldon, winners of the past two NorCal Open Division championships, it was the end of a week-long rollercoaster. The Huskies were originally forced out of the state tournament when Elk Grove Unified School District suspended all activities. They were reinstated in the field 24 hours later after a lot of public and political outcry.

SportStars’ 2018-19 NorCal Basketball Player of the Year, Marcus Bagley, was hoping he and his Sheldon teammates would get one more shot at a state title. (James K. Leash photo)

This is Bigger Than Basketball

A 59-58 win over Dublin sent Sheldon into an Open Division NorCal final against the Dragons set for March 12, two days before the scheduled Open Div. boys state final. Like all teams still playing, they were left to ponder what-ifs.

“The hardest thing is wondering if we, as a public school, could have gotten back to the final and could have beaten them,” Sheldon coach Joey Rollings said of the potential and anticipated third straight chance to take down Sierra Canyon-Chatsworth, the mighty private school that has attracted multiple NBA offspring in the last three years. “We had a great season and got out and played some great teams. There is a lot to be proud of in this team and the players.”

CIF announced its state basketball cancellations the morning after the NBA shut down all its games. That included a Sacramento Kings-New Orleans Pelicans game minutes before tipoff at Golden 1 Center. A referee for that contest had worked the March 9 game with the Utah Jazz, whose players Rudy Gobert and later Donovan Mitchell had tested positive for COVID-19.

When the NBA news broke, all concur the state championships’ fate seemed sealed. Even still, McCord said he was up until 2-3 a.m. preparing for a game that was unlikely to happen. For Sheldon, it was another sudden turn of the rollercoaster.

“Once the NBA and others announced that they were shutting down, we kind of figured that there was a good chance that (the CIF State Championships) would be cancelled,” Rollings said.

“We were privileged to have that last game against Dublin. And we appreciate everything the CIF and others did to make that happen. We were hoping to have at least one more game, but it was the right thing to do. It’s better to be safe than sorry.”

Kennedy Johnson and the Bishop O’Dowd girls were hoping to redeem a state finals loss from 2019. (Jean-Paul Toshiro photo)

For O’Dowd and coach Lou Richie (pictured at top), the reality of COVID-19 hit home. Utah Jazz assistant coach Johnnie Bryant, a 2003 O’Dowd alum and former standout, had been under quarantine.

“They say there are seven degrees of separation, but now it seems it is down to two degrees,” Richie said. “We are very close, no blood lines but we are like brothers. The Utah coaching tree, like the O’Dowd coaching tree, is so thick. It brings this home.”

There was disappointment that O’Dowd would not have a chance to add to its rich boys basketball history, which includes a record 19 North Coast Section boys championships, 10 state championship appearances and state titles in 1981 and 2015. They were hours away from traveling to Cosumnes River College to face Sheldon, which beat the Dragons 61-60 in the 2018 boys NorCal Open Div. final.

“All this week we were in communication with Coach Rollings, wishing him the best of luck after getting back in, then offering congrats on their win,” Richie said. “After the news of the cancellation, he reached out to me and our team and was so gracious and kind. I responded, and in the spirit of competition, I told him ‘Great job, great season and we can’t wait to meet you again’ and sent our love and prayers to the Sheldon family.”

Campolindo-Moraga was enjoying a storybook boys postseason run. The Cougars were the lone NorCal boys team to win a state title a year ago. This year they moved from Division III to Division I and landed in that final by beating Serra-San Mateo 65-57 at home, followed by road wins over Capital Christian-Sacramento (60-58), Salesian-Richmond (60-59) and De La Salle-Concord (54-49). The team was practicing, preparing to face Ribet Academy-Los Angeles in an improbable matchup of No. 7 vs. No. 8 seeds, when news of the NBA shutdown broke on social media.

“I think there was an uneasy feeling all week but we had hoped that things could fall together and we would play the game,” Cougars coach Steven Dyer said. “During basketball season, and especially during playoffs, we’re in a bubble from the outside world. But (Wednesday) when the guys saw, ‘Oh wow, Rudy Gobert tested positive,’ and then the NCAA cancelling some of its tournaments, they were looking at this being serious.”

From left to right, Emmanuel Callas, David Ahazie and Carter Mahaney celebrate their 2019 CIF Div. II state title. Callas and Mahaney were key members of the Cougars team that would’ve played in the 2020 Div. I final. (James K. Leash photo)

A team meeting after the CIF games were cancelled was emotional, especially for spirited team leader Carter Mahaney, one of four Campolindo seniors. He’ll play next season at Northern Arizona.

“We did everything we could, but there were things out of our control,” Dyer said. “We will cherish the good times during the season and pay respects to the four seniors who led us this way.”

Like O’Dowd, the St. Mary’s campus saw the end to a pair of seasons.

“Yesterday we were all consoling each other; it was a refreshing sight and it was heartbreaking,” Toler said Friday. “Our chemistry was incredible. We preached this year that there were only two things in basketball you can control: attitude and effort. This was about managing their feelings. It was having them express their feelings and listen to them, and how we could all control what we could and what we couldn’t.”

Buckner said he was still getting text messages from his players on Friday.

“We had busloads of students headed up,” he said. “It was one of those things that 10-15 years from now, they can say, ‘Remember when both our boys and girls played for a championship at the Sacramento Kings arena?’”

O’Dowd’s girls have won three state championships, including the inaugural Open Division title in 2013. The Dragons, who had seven seniors, were eager to face Rosary Academy, whom they defeated 43-40 at the Nike Tournament of Champions, and to whom they lost to 75-58 in last year’s State Division I final. After the cancellation, the players were still trying to figure out a way to face Rosary again.

“The girls were saying, ‘Can we play them in a scrimmage, or play in another state?’” McCord said. “It was important that we let them talk, hear their voice and validate their feelings.”

Communication was the best remedy for the disappointment of the news.

“They are going to remember this day for the rest of their lives. But you know, kids are resilient,” Richie said. “When we talked to our kids, we said, OK, how are you feeling? … Telling them you did a great job, but you can’t control everything. Their lives will go on. It’s a teachable moment.”