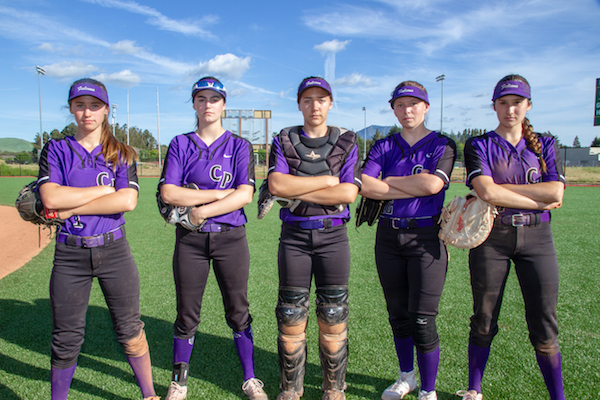 After Several Seasons Of Middle-Of-The-Road Finishes, The College Park Falcons Have Built A Diablo Foothill League Juggernaut With A Mix Of Experience, Youth •

College Park High-Pleasant Hill’s softball team is growing confident. Winning 11 of your first 12 games will do that.

But let’s not go too crazy.

“Yes, we are confident, but we are still just going to keep a humbleness to us,” Falcons sophomore pitcher Sofia Berryhill said. “We are not just going to go out there and think we are all that and a bag of chips. But we have got pretty high hopes.”

After years of teetering around the .500 mark, College Park has soared up the softball ranks, sitting at 14-2 overall through April. The rapid progress has been instigated by an aggressive style instilled by its new coaching staff.

Impressive, but don’t call this surprising.

“It feels good, it’s something that we’ve worked for,” catcher Jenna Piro, another of the team’s seven sophomores, said. “It’s not something unexpected by any means. We have known what we have this year; we have the talent and what it takes. It’s no surprise; we’ve known we have had it within us.”

Confident yet grounded and steady, the Falcons have shown that they are for real with a trio of impressive wins.

After staging a dramatic rally to defeat Clayton Valley Charter-Concord 5-4 on April 15, College Park came out and walloped Concord High 10-0 in a game that ended after six-innings via the 10-run rule. Pitcher Sofia Berryhill threw a perfect game over those six innings.

The win over Clayton Valley showed the Falcons’ ability to come back, down 4-0 heading into the bottom of the sixth inning and trailing 4-1 in the final frame. The next day came their decisive victory over Concord, winners of four North Coast Section championships in the past eight years and the defending Diablo Athletic League Foothill Division champ.

They concluded that week with a 2-0 win on April 18 over Alhambra-Martinez, winners  of three straight NCS Division II championships from 2014-16. That win brought them to 6-0 atop the Diablo-Foothill Division. Despite a 2-0 hiccup loss to Benicia on April 23, the Falcons still entered May with an 8-1 league mark and one-game lead over Benicia in the standings.

Senior Megan Downing takes off with the pitch against Concord. Aggressive baserunning has been a staple of the Falcons’ game in 2019.

But it’s not just what the Falcons did over that mid-April three-game stretch. All spring they have been applying their take-any-and-every-base approach.

“The girls have done a good job with staying aggressive on the base paths, trying to put pressure on the defense and stay hungry,” College Park softball coach Scott Wood said. “Not be satisfied until they hit that final base, which is home plate.”

GET MORE: View Our Most Recent Baseball/Softball Coverage

Wood is in his first year as varsity coach after leading the Falcons JV program for the previous two years. He brought in a new coaching staff highlighted by former Major League infielder Kiko Garcia. Garcia coached College Park to its only NCS softball championship in 2001.

“Kiko has been around a long time and is very knowledgeable,” Concord coach Megan Coddington said. “Many of our girls have played on travel ball with his team, or played against his team. So that is a positive for them, having that coaching staff there.”

Their approach is, seize any base you can: stolen bases, moving on wild pitches and passed balls. It’s been a winning approach this spring.

“I think it’s a great improvement,” Berryhill said. “I love the way they run practices and teach us everything we know, to win these games. It really does show in the game. The plays we run in practice, show up right in the game. And we know how to execute them well because of them. They taught us how to be aggressive.”

Added Piro: “Our team has a lot of talent. We have so much potential, and these coaches have really brought it out this year. And let us shine.”

Piro is one of three sophomore regulars batting over .400, hitting at a .500 clip over her first 24 at-bats. Morgan Crosby was hitting .469 over 53 plate appearances, also leading the team in RBI with 12 and stolen bases with 11. Hana Elawady was hitting .406 through 39 at-bats.

“We have three seniors, a make-up of juniors that do a good job and then a good solid core in the sophomore class,” Wood said. “Everybody’s contributing. Good leadership is developing and the girls are really responding to each other and feeding off one another and playing their roles to the best of their ability.”

Berryhill’s six-inning perfect game in the win over Concord was her first of this season and her second of her young career.

“She’s a great pitcher,” Piro said. “She takes the game seriously. She wants to win and she expects her defense to back her up. In games like this, they are showing that. That’s what they do.”

Berryhill isn’t one to get rattled in the circle.

“I just practice and keep my head up,” she said. “I keep my emotions in check and I take the game by every pitch.”

The win over Concord was an example of all facets of the game coming together for the Falcons.

“Sofia did a great job in the circle,” Wood said. “She was able to get the strong defense behind her. Because there were some great defensive plays out there. And timely hitting.”

“She had good movement on her rise ball, her screwball,” Coddington said. “But the name of the game for us is we didn’t make the adjustments.”

Now comes the chance for this College Park softball team to realize more of its potential, with the NCS playoffs around the corner. They would be happy to string together some postseason wins and eclipse what last year’s Falcons did, which was to win one Division I playoff game before falling in the quarterfinals.

“I want to see more of what I think our team can do,” Berryhill said. “I think this is a good preview of what we can step up to do.”