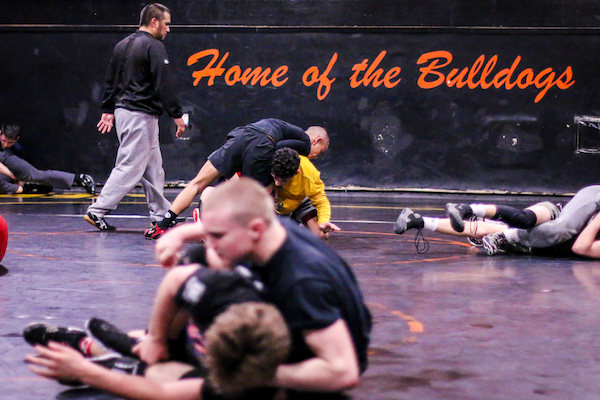 Vacaville wrestling coaches Clint Birch and Armando Orozco have a business that is ready for the Shark Tank.

Birch and Orozco — emboldened by administrators, parents, alumni and rabid fans — manage the most profitable high school wrestling program in the Sac-Joaquin Section.

Even without a major lender, the team travels great distances and always gets a return on its investments.

“We are a mom-and-pop organization,” Birch explained. “It’s not like we have a great big donor. We have an alumni golf tournament and fund-raise as much as we can, even all the way down to lemonade stands.”

Funds are vital when you travel like a wrestler. Bulldog grapplers will traverse over 7,800 miles this season.

These aren’t sightseeing tours. Vacaville competes in some of the toughest tournaments in the nation, and uses elite competition to prepare the varsity lineup for California’s lengthy postseason that culminates at the all-division California Interscholastic Federation State Wrestling Championships at Rabobank Arena in Bakersfield.

To bring a large group to state and contend for a high team score, the Bulldogs must first chase success in the SJS.

“You can’t be a state power unless you are winning in your own backyard,” Birch said. “The No. 1 goal is always the banner in our league, at section duals and (the SJS Masters Championships).

“If you are winning Masters, you are sending lots of kids to state, where this year it is even more hard than usual. California has more nationally ranked teams and wrestlers than ever before.”

TJ Ruiz is a NorCal-ranked senior at 120 pounds.

No team has catapulted to state on the back of SJS Masters success like Vacaville. The Bulldogs have more Masters titles (17) than the next two teams (Ponderosa-Shingle Springs and Turlock) combined. And unlike Ponderosa and Turlock — who last won titles in 2006 and 2004, respectively — Vacaville has done it lately. The Bulldogs have won 20 of the last 30 SJS titles (Div. I Dual and Masters) since Birch joined the program in 2003.

Last year, Vacaville placed 10 wrestlers in the top eight to win Masters — and finished No. 10 in California. And even after graduating two state runner-up CIF wrestlers at 138 (Lawrence Saenz) and 285 (Jake Levengood) pounds, and returning no CIF medalists, Vacaville is still the team to beat in the SJS.

It comes down to depth, pins, finalists and medalists at Masters. Vacaville will likely enter the tournament with 12 to 14 wrestlers scoring points in 14 different 32-man brackets.

Vacaville had eight wrestlers ranked among the top five in the SJS in the latest release of SportStars’ NorCal Wrestling Rankings on Jan. 18. The Bulldogs should see their status improve after a tremendous third-place showing at The Clash XVII Jan. 5 in Rochester, Minnesota. The Clash is considered the toughest national dual tournament in the United States.

Birch and Orozco attribute Vacaville’s pride for dual meet success to Vacaville’s Midwest roots — stemmed from longtime coach Larry Nelson, a former Big Ten champion with the University of Michigan. Nelson built the program and retired in 1994. Of course, a stout 2019 lineup certainly bolsters the cause.

“You need tough guys who have been there to win dual meets against nationally ranked teams,” Birch said. “We have a big senior group.”

“We are starting something big this year as a group of seniors,” said Peralta, ranked No. 5 in NorCal at 132 pounds. “We want to keep that going, so we are all excited, but we know we have to work hard, so that’s what we are doing in the wrestling room right now.”

Senior Tyee Ducharme ended the third week of January ranked No. 2 in NorCal at 152s.

“I just think our team is pretty solid,” added Ducharme, No. 2 in NorCal at 152 pounds. “It’s knives sharpening knives in here. This solid lineup is just making everyone better.”

All divisions collide at Masters the following week at Delta College in Stockton. That’s where Vacaville’s senior leadership, junior star Chris Island (NorCal No. 3 at 220 pounds), and the best of Vacaville’s sensational freshman class should collaborate for significant team scoring.

Isaiah Medina, No. 3 in NorCal at 106, leads that group. He was 4-2 at the Clash and won four matches at the prestigious Reno Tournament of Champions. Freshmen Ethan Birch (Clint’s son) and Luke Levengood (Jake’s brother) could also occupy a spot in Vacaville’s postseason lineup. Birch won a challenge match to close in on that goal.

You can’t miss the Vacaville fan base at Masters. Bulldog supporters get loud as wrestlers fight through each bracket. And they erupt when the program is announced in the top tier of team scores.

“It’s a special thing to be a part of Vacaville wrestling,” Birch said. “We have a great administration. I am proud of everyone who supports us, from our fans on down.”

It’s what makes the program a business, and business is a-booming.