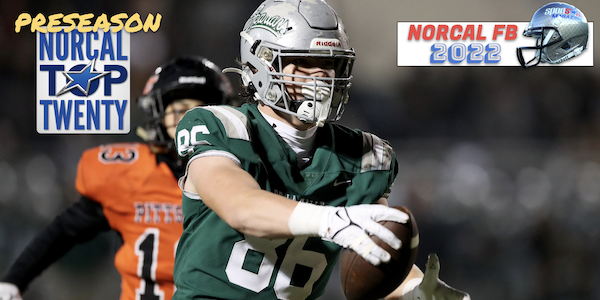 This year more than any other, choosing which team to place at the top of our Preseason NorCal Football Rankings was a decision we spent close to two weeks pondering. Cases can legitimately be made for three teams: De La Salle-Concord, Folsom and Serra-San Mateo — and we’d be surprised if each team didn’t end up atop at least one set of preseason rankings.

In the end, we narrowed it down to Folsom and De La Salle — teams which played to a 28-27 Folsom win in the CIF Division I-AA regional playoff last December. Our back-and-forth on which to choose was even a topic during the Season 2 opener of the 7 Friday Night podcast.

In an essential coin-flip, we gave De La Salle the slightest of edges based on history, the strength of the Spartans line (which has always been an indicator of the program’s best teams), and the fact that the program was finally able to conduct the kind of offseason that has helped set it apart from others. So here we go! Let the shouting begin.

The importance of a regular (non-COVID) offseason can’t be understated for a program that has built its dynasty from a foundation centered upon a near year-long grind. Giving that full routine back to a roster fueled by the desire to avenge a 2021 season that featured a pair of historic losses, and it’s hard not to believe the Spartans will find their footing very early. Much of the Spartans returning talent is centered up front with an all-senior line led by Derek Thompson (Harvard) and Cooper Powers (TCU). Notre Dame-bound four-star tight end Cooper Flanagan and Fresno State-committed running back Charles Greer will be two primary weapons at the disposal of whoever wins the quarterback job. Nevada-commit Journey McKoy (5 interceptions in 2021) and Chase Tofeano (5 sacks) will be key defenders.
FIRST GAME: Aug. 26 at No. 19 Monterey Trail-Elk Grove

While the defending CIF Open Division State Bowl finalists only have eight returning starters across both sides of the ball, the Padres’ depth at the skill positions is still off the charts. Maealiuaki Smith, a junior with several offers including Florida State and Louisville, is expected to win the job at QB. He’ll have a number of targets, including 6-foot-4 tight end Seamus Gilmartin and senior wideouts Joey Villaroman and Jayden Weber. San Diego State-bound lineman Ryan Silver, and the junior tandem of linebacker Jabari Mann and strong safety Joseph Bey, will key the defensive side of the ball. Serra opens the season with back-to-back games against the two teams above them.
FIRST GAME: Aug. 26 @ No. 2 Folsom

Every night will be Fireworks Night at Pirates Stadium in 2022. The defending North Coast Section Div. I champions are led by one of the top-ranked QBs in the country, Miami-bound Jaden Rashada. His spread offense will feature five (!!) receivers with Division I offers, led by seniors Rashid Williams (Washington) and Zack Card (Oregon State), and Jadyn Hudson (a sophomore with SEC offers). The Pirates success will boil down to how quickly they can find success on both lines. The linebackers and secondary will be the strengths of the defense.
FIRST GAME: Aug. 26 vs. Jesse Bethel-Vallejo

There’s going to be a lot of new faces on this version of the Lancers, but one that won’t be is senior QB Matt Dougherty. He missed most of last season with an injury, but is back to full health and a big reason why this team still landed a top 5 slot in these NorCal Preseason Football Rankings. Uncommitted three-star receiver Andrew Adkison will be a key weapon at his disposal, as will running back (and free safety) Keala Keanaaina. The biggest felt losses may be up front. Few offensive lines were as dominant a year ago. Senior LT Oliver Bari (6-4, 275) will lead the way in attempting to set that tone again.
FIRST GAME: Aug. 26 vs. No. 6 Central Catholic-Modesto

Junior QB Tyler Wentworth will return after helping the Raiders to the CIF 2-AA State Bowl game as a sophomore last season. This team will likely be led by its seven returning starters on defense, however. Because the offense will be replacing 3,500 rushing yards that left when Aiden Taylor and Julian Lopez graduated last spring. Junior safety Brooklyn Cheek and senior nose guard Roman Foumai will key the experienced defensive unit.
FIRST GAME: Aug. 19 @ Merced

Nearly all of the key players return from last year’s celebrated Bells team that reached the Central Coast Section Div. I semifinals. That includes standout senior running back Ben Pfaff (16 rushing TDs, 19 total) and two of the team’s top three tacklers from last season, seniors Brandon Broch and Jake Hansen. The talent is certainly there to warrant this spot in the NorCal Preseason Football Rankings, but they’ll need to stay healthy.
FIRST GAME: Aug. 27 @ Menlo-Atherton-Atherton

It’s not as many starters as longtime head coach Michael Peters has been used to in recent years, but he’ll still have nine of them and be able to draw from an undefeated JV team. The electric Jaivian Thomas — a senior RB with 4.4 speed — returns as the teams biggest playmaker. There will be plenty of talent on the defensive side of the ball too, including junior LB Amir Gobar and senior DT Malik Richardson. The most glaring task facing Peters will be replacing four-year starting QB, Dreyan Paul.
FIRST GAME: Sept. 2 vs. No. 7 Bellarmine-San Jose

With six starters returning on both sides of the ball, the Ugly Eagles have plenty to work with as they look to stay among the East Bay’s elite programs. Look for Clayton Valley to open up their offense more to take advantages of incoming transfer QB Christian Aguilar (via Pittsburg). Look for junior DB/RB Micah Avery to continue to develop into a top two-way player, and the defense to lead the way early as it returns six of its top eight tacklers from a season ago.
FIRST GAME: Aug. 26 vs. No. 15 Salinas

A strong defense led by SportStars’ All-NorCal LB Derek Houston and five other returning starters will need to hold the line while the offense retools to start the season. The Thunder graduated nine starters from its explosive 2021 offense, but it will have a familiar face at the most important position. Senior QB Joey Roberts will be back behind center after throwing for nearly 1,300 yards with 11 TD and 4 INT in 2021. Regardless of where this team lands in various NorCal football preseason rankings, it’s going to be playing with a chip on its shoulder to prove 2021 wasn’t a fluke.
FIRST GAME: Aug. 19 @ Turlock

One year after winning 14 games and cleaning NCS and CIF 4-AA State Bowl championships, the Wildcats will casually bring 15 starters back for 2022. And they traded one state bowl champion QB (Michael Ingrassia, graduated) for another one as Joey Cook transferred to the Wildcats after throwing 30 TD passes for CIF 5-AA champion San Marin-Novato. Junior Charles Williams is a dynamic playmaker at running back who gets to run behind an experienced line. Five of the team’s top six tacklers on defense also return.
FIRST GAME: Aug. 26 @ Freedom-Oakley

It feels unnatural to suggest, but are the Rams flying a bit under the radar to open this season? We feel like they might be. Last season’s team was certainly senior-heavy, but there are plenty of weapons for veteran coach Tony Frank to utilize. Tops on the list is all-purpose back Asante Carter (21 total TDs in 2021). There’s also the WR tandem of Naseri Danielson and Jason Calvin which combined for nearly 1,000 yards and 10 TDs a season ago.
FIRST GAME: Aug. 26 vs. West-Tracy

We sort of feel like Wilcox is getting a bit less attention than a defending CCS and CIF 2-A Regional Champion should be. Especially when its returning 12 starters and shown sustained success through multiple graduation cycles. This Chargers squad brings back QB Armand Johnson who passes for more than 1,600 yards and rushed 600 more. Junior Jeremiah Lewis and senior Andrew Palacios should key the vaunted veer rushing attack.
FIRST GAME: Aug. 26 @ Valley Christian-San Jose

There’s plenty to like on this Cowboys team that returns the majority of both its offense and defense after posting an undefeated regular season in 2021. The list of standout talent includes Cal-bound senior WR Nyziah Hunter and SportStars’ All-NorCal LB Aidan Flynn. One concern? Despite seven starters returning to both sides of the ball, Salinas will be replacing its entire defensive line.
FIRST GAME: Aug. 26 @ No. 9 Clayton Valley-Concord

They’ve got a guy nicknamed ‘Thor’ — do we really need to say more? Yes? OK then. Blake Nichelson (“Thor” to teammates and the Valley Oak League community) is a four-star uncommitted LB who also had 2,600 total yards from scrimmage and 46 TDs last season. He’s one of 16 returning starters for a Buffaloes team that won a Sac-Joaquin Section title.
FIRST GAME: Aug. 19 vs. Vista del Lago-Folsom

Memories of a last-minute, gut-punch Div. I playoff loss to Bellarmine will be the fuel that powers 12 returning starters (six on both sides) for the Wildcats. Los Gatos will welcome back a slew of skill players, including senior QB Jake Boyd (22 TD, 6 INT in 2021) and senior running back Emiliano Mejia (900+ yds., 12 TD). Star LB Jake Ripp is now at Boise State, but the Wildcats will still return three of their top five tacklers.
FIRST GAME: Aug. 26 vs. Corona del Mar-Newport Beach

Even though there’s a high probability the Mustangs open the year 0-2 due to a schedule that sees them play No. 2 Folsom followed by No. 1 De La Salle, it doesn’t mean they don’t deserve to be ranked. The running back tandem of Ali Collier and Daelin Ellis both return to TJ Ewing’s run-heavy offense. The two backs combined for more than 2,200 yards and 37 TDs last season.
FIRST GAME: Aug. 19 @ No. 2 Folsom

Before a firsts round loss to Monterey Trail, coach Joe Cattalico’s Grizzlies were one of the hottest teams in the region heading into the SJS postseason, having won 7 of 8 — including a win over Folsom. Ten returning starters will hope to channel that end-of-season momentum for 2022. Leading the way will be running back CJ Henning and a line led by Zaire Collier.
FIRST GAME: Aug. 19 @ Elk Grove

Ignore the Cougars at your own peril. One of the best coaching staffs in the East Bay will return its QB (Dash Weaver) and one the East Bay’s best two-way players in WR/FS Robbie Mascheroni. Campolindo does tend to deal with lower roster numbers and depth can be an issue, but few programs get more out of what they’re dealt.
FIRST GAME: Aug. 26 vs. Moreau Catholic-Hayward