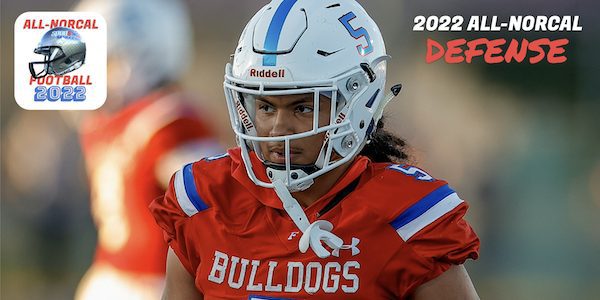 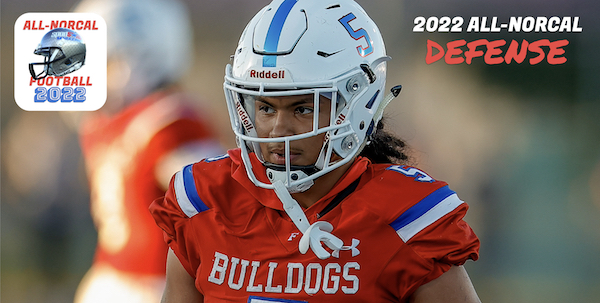 The 6-foot-3, 240-pound Hillman dominated the trenches recording 10 sacks when he was not leading the way for Placer’s vaunted rushing attack.

Edge rusher used his speed to record 10.5 sacks and force three fumbles, and added an interception for good measure.

The San Diego State-bound defensive end was a Co-Defensive Most Valuable Player of the East Bay Athletic League’s Mountain Division after racking up 58 tackles (19 for loss) with seven sacks.

An absolute force for the back-to-back CIF State Bowl champions, Pearce was selected to the All-NorCal Defense after recording 83 tackles (34 for loss) with 12 sacks and a whopping EIGHT forced fumbles.

Nearly half of his 63 tackles went for loss, which included 9.5 sacks. The WCAL Defensive Lineman Of The Year was also credited for 10 QB hurries, two forced fumbles and one fumble recovery.

Only a sophomore, Walls was the Pirates’ most impactful player down after down. He finished with 99 tackles (25 for loss), a team-best eight sacks, four forced fumbles and two recoveries.

Clemens was the Marin County Athletic League Defensive Player of the Year and won the same award region-wide from the Marin Independent Journal. He led the 13-1 Wildcats with 82 tackles and added five sacks.

The 6-foot-4, 205-pound linebacker strikes an immediate presence on the field — and that’s before he’s flying around making one of his 149 tackles or forcing one his five turnovers for the section- and NorCal-champion Wolves.

Our NorCal Defensive Player of the Year led the way for a dominant defense that helped pave the way to the CIF Open Division State Bowl Game. Mann had a team-best 87 tackles with five sacks and an INT.

Oregon-bound talent lands on the All-NorCal Defense after leading the Fightin’ Irish with 79 tackles while also adding four sacks, two forced fumbles and a blocked field goal. He also contributed over 600 total yards of offense.

Afato quarterbacked the Honkers’ defense with 100 tackles in just 10 games, including 11 tackles for loss, and picked off a pair of passes when he was not throwing them as Yuba City’s signal-caller on offense.

O’Kelly was the leader of a defense that allowed seven points or less in seven of the team’s 11 games. The only game in which the Gators allowed more than 14 was a 28-21 loss in the CCS Open Division playoffs. He had a team-best 135 tackles and three fumble recoveries.

Bey followed up on his stellar sophomore campaign by delivering a junior season that won him West Catholic Athletic League Defensive Back of the Year honors. He was credited with 46 tackles, 20 of them solo.

San Jose State-bound safety shut down opposing receivers and had three interceptions when teams dared to throw the ball in his direction; recorded 75 tackles for Bulldogs’ stout defense and had a scoop-and-score TD in the CIF 1-AA NorCal playoff against De La Salle.

Guerrero was flat-out the most consistent member of the Spartans’ secondary. He delivered a team-best seven interceptions, a pick six, a sack and 25 tackles. Guerrero’s most impactful interception may have come in the final minute of the half during the CIF Div. 1-AA NorCal final at Folsom.

Smith spent time at safety and corner and was often avoided at all costs by opposing passing games. The Washington State-bound talent logged 36 tackles, six pass breakups and a forced fumble. He also had over 800 yards receiving with eight TDs.

Arguably one of the Bay Area’s best two-way players of 2022, the Cal-bound Vadrawale makes the All-NorCal Defense on his defensive back chops alone. He led the Cougars with 75 tackles (37 solo) and added an interception, blocked field goal and a fumble recovery scoop-and-score.

It’s safe to wonder if the presence of Flanagan would’ve helped tip the scales in De La Salle’s 33-28 CIF Div. 1-AA State Bowl loss to Lincoln-San Diego. The Notre Dame tight end commit missed both CIF games with an ankle injury. He had 38 tackles (10 for loss) with 3.5 sacks and an interception. He also caught 27 passes for 497 yards and three TDs.

How does a player make his inclusion on this roster an easy choice for us? Being named both the Offensive AND Defensive MVP of one’s league is a heckuva way to start. That’s what the highly coveted 2025 recruit did this season. Lawson amassed more than 1,000 all-purpose yards with 16 total TDs. He also had 51 tackles with a sack and interception.

He did a bit of everything for the CIF 2-AA finalists, spending time at QB, RB and safety. He reached 1,073 yards rushing on just 79 carries (more than 14 yards/carry) with 15 TDs. Yes, that’s a rushing TD once every 5.2 carries. He also had a pick six in the state championship game.

Fresno State-bound star’s All-NorCal Defense credentials begin with having scored five defensive touchdowns. He returned four of his five interceptions for scores and added a fumble recovery TD. He was also the WCAL Wide Receiver Of The Year with 32 catches for 687 yards and eight scores.

Nixon was a Swiss Army knife on the gridiron eclipsing 2,200 all-purpose yards (1,280 receiving; 858 rushing) and 27 offensive touchdowns. He added 48 tackles and four sacks on defense, and was the Huskies’ punter too — he literally never left the field.