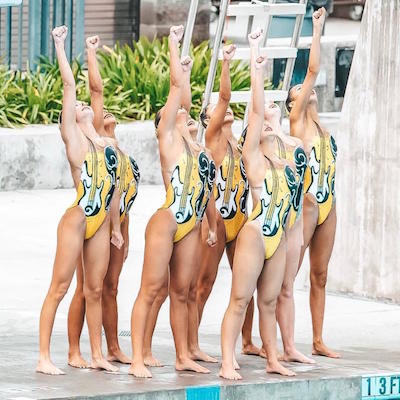 The Walnut Creek Aquanuts had another strong showing at the U.S. Junior and 13-15 National Championships, winning Gold in 5 and the High Point Award.

U.S. Nationals is the most prestigious National event in the sport of synchronized swimming for the Jr. and 13-15 age groups.

One year ago at this event, WCA walked away without a single gold. This year was not to be a repeat!

She has coached most of this year’s Junior team for the past four years, coaching soloist and graduating senior Ava Jih-Schiff of Danville for over six years.

“In her 10-year career, Ava had never won a national gold medal until now. This year, her last with WCA, she won a medal of every color. It was the perfect ending!”  said McGregor.

For the Juniors, the Free Combination event brought their first gold medal for WCA.

The momentum continued into the solo event where Yara Elian topped the podium with gold, Ava Jih-Schiff took the bronze swimming one of her routines to “Last Dance”, and Marlena King took fourth nationally.

The excitement continued, and carried into the final Junior Team event.

“We kept doing more and more and more to prepare, and finally this year it was enough for gold! Everyone did a great job and you could tell the athletes were ‘all in’,” beamed McGregor.

In the 13-15 events, Kristen Smidstra coached her athletes to gold in both the Team and Free Combination events. (Team has eight swimmers and Combo has ten swimmers).

The WCA B team, coached by Robin McKinley, also made the finals placing seventh in the Team event.  13-15 duets missed the podium, but all three made it into the finals.

Soloist and former gymnast Alexis McCracken of Walnut Creek placed fifth in the solo event. “Since the addition of the 13-15 age group to this prestigious National meet in 2014, WCA hasn’t won gold until this year. The girls put in a tremendous amount of hard work for this outcome”, said Coach Smidstra.

On the final day of Nationals, WCA placed two athletes on the 13-15 National Team. Megan Kerner of San Ramon and Alexis McCracken of Walnut Creek will represent the U.S. internationally this summer at the Youth World Games in Slovakia.

Upcoming event for the Aquanuts:

Get Your Tickets here.

Elegant food included with your ticket. Plus a great silent auction. $25 for General Admission; Kids under 5 are Free. For more information: www.aquanuts.org