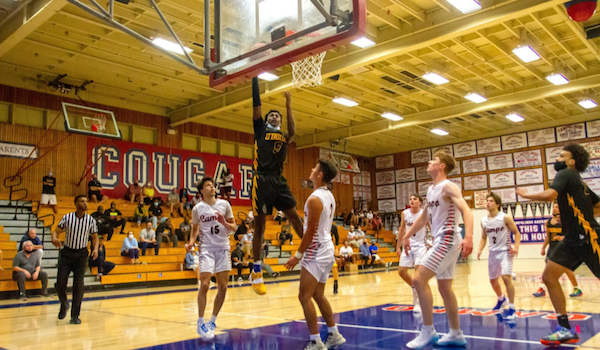 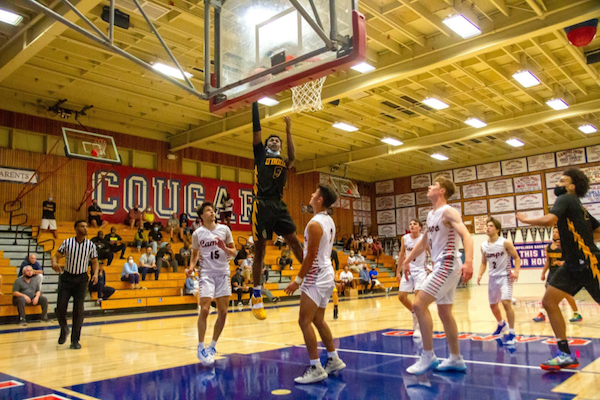 Named After The Famed Jazz Trumpeter, Bishop O’Dowd’s Marsalis Roberson Features A Smooth All-Around Game And A Drive Fueled By The Memory Of His Father •

There’s a sense of renewal at Bishop O’Dowd High, and it’s not just about the return to live basketball action after a year of dormancy due to the COVID-19 pandemic.

The Oakland hills campus is booming with activity, beyond the return of sports. Work on the sprawling new O’Dowd Center is underway, with a new gymnasium and strength and conditioning facilities among the coming amenities. The new gym will house the memories created by an illustrious program that’s among the most celebrated in California.

For O’Dowd and 6-foot-4 senior guard Marsalis Roberson, there was a sense of unfinished history when the team reconvened April 19 for its first full practice ahead of this rare spring season.

Indeed, the Dragons cannot add to their record 19 North Coast Section titles, and won’t get a try at a third state championship in this playoff-less abbreviated season. Yet there is opportunity before Roberson leaves to play at Cal following a remarkable run.

The stats are impressive. In 2019-20 he averaged 16.5 points and 6.3 rebounds a game and earned Bay Area News Group’s Player of the Year and SportStars’ All-NorCal First team honors. But it’s all about work and action.

Bishop O’Dowd opened its 17-game season on April 27 widely considered the No. 1 team in NorCal. The Dragons cruised to a win over San Leandro that night and entered the second week of May with a 3-3 record. They remain just inside the Top 5 of SportStars’ NorCal Top 20, as their three losses were all to top-ranked teams through May 9 — Campolindo-Moraga (No. 1), Archbishop Mitty-San Jose (No. 2) and Salesian-Richmond (No. 6).

Richie said what stands out about Roberson “right now are his work ethic and coachability.” He’s challenging Roberson to “grow into a great leader. You want your best player to be your best leader.”

That leadership goal, including getting next year’s leaders prepared, top Roberson’s to-do list.

“Just bonding with the guys and trying to win every game in NorCal, and for the most part trying to be a leader,” Roberson said. He’s learned from others, and still consults with former teammates like 2019 graduate Iniko McNeil. “I want to teach leadership skills to the younger guys, since they will be trying to get ready for a national schedule next year.”

The Dragons’ 10 state title appearances are third-best among California boys basketball programs. Last March they were on the cusp of an opportunity for an 11th. The Dragons were hours away from playing Sheldon-Sacramento for the NorCal Open Division championship when all CIF sports were halted due to the COVID-19 pandemic. That game never happened, nor did any state championships.

Roberson said the news was emotional for several team members. For Roberson, he was denied a chance at redemption. He felt he could have played better in the 73-60 regional semifinal win over Archbishop Mitty-San Jose.

He selected Cal, where his mother is an academic advisor, from a list of finalists that included Stanford, Cincinnati and UC Santa Barbara. At the end, it came down to the two Pac-12 schools, and his cell phone acting up.

While asleep in his room and his phone well away from his reach, at 3 a.m. the phone randomly dialed Cal coach Mark Fox. Fox later called back to check that Roberson was OK.

That cellular phenomenon helped make up his mind.

“It was an epiphany, like God was talking to me,” Roberson said.

“It’s great to have the connection with Cal and O’Dowd,” he said. “But I want to build my own legacy and build a name for myself.”

Remembrance holds a deep meaning for Roberson, who lost his father, Jason, on Oct. 8, 2017 to gun violence in the Sacramento area, as Marsalis was starting his freshman year at Natomas High. He made it a point to announce his commitment to Cal on Oct. 8, 2020.

In the shooting’s aftermath, Brenaia Roberson found it of utmost importance to find safe surroundings for Marsalis.

“I was so scared when I moved him back from Sacramento; I couldn’t think of any school that I wanted him to be at but Bishop O’Dowd,” she said. “It was so important he would be in a safe environment. I wasn’t even thinking about basketball, and I am from Oakland and know about all the basketball history at O’Dowd.”

Often Marsalis can be seen after games in quiet reflection.

“There have been times after we’ve won a big game and he is by himself not celebrating,” Richie said. “He puts his dad’s name on his shoes. That’s tough.”

“I’m thinking about him a lot,” Marsalis said. “I try to reach my best expectations and I use him as motivation.”

There is history in Roberson’s name. He’s named for renowned jazz musician Wynton Marsalis. And his middle name is Payton, for Oakland native and NBA legend Gary Payton. While he has never met Marsalis, he did meet Payton. He was only 10 years old and needed encouragement from his mother to talk to the Hall of Fame point guard at a car dealership.

His mother noted that current Vice President Kamala Harris is a family friend. Brenaia was proud to see Marsalis participate in a public service spot for the VOICE Project, a nonpartisan advocacy group, joining in an effort to promote voter registration for the 2020 general election.

In a video on Twitter, he encouraged young adults to vote, or to pre-register if not yet of age.

“Honestly I felt voting was something that had not been talked about a lot in African American households,” he said. “It made me do my own research into the subject.”

During the lengthy sports shutdown, Roberson stayed in Sacramento, where his uncle lives. He trained there to protect his mother and younger siblings from any potential COVID-19 exposure.

“In addition to me having to deal with the pandemic, to cope with him not being at home with me …  it was a very tough decision,” Brenaia said. “I went out on faith and in the end I thought it was the best decision.”

He’ll be close by again at Cal, where his family can experience his games. Brenaia can leave work and cross the campus to see her son play. And his biggest fan, his grandfather, Malgy Blue, is so excited he’s already signed up for the Bear Insider news site.

Until then Marsalis will work on passing the Dragons’ mantle to athletes like 6-9 sophomore Jalen Lewis. Lewis, a top-ranked national recruit in the 2023 class, earned a spot on the 2019-20 SportStars All-NorCal third team.

The question now is how the team will respond after a year apart, with different parameters.

“If you asked me a year ago, I’d say on paper we had the top team returning to NorCal, but I haven’t seen my point guard in over a year in person,” said Richie, ahead of holding that first full practice April 19.

“Perspective has changed,” Richie said. “Now it’s staying COVID-free, and important things like love, happiness, being kindful, and that everyone is emotionally supported. We have to sit down with our players going forward (and ask), ‘What do we want from this?’ Because when you have more engagement, you have more accountability.”