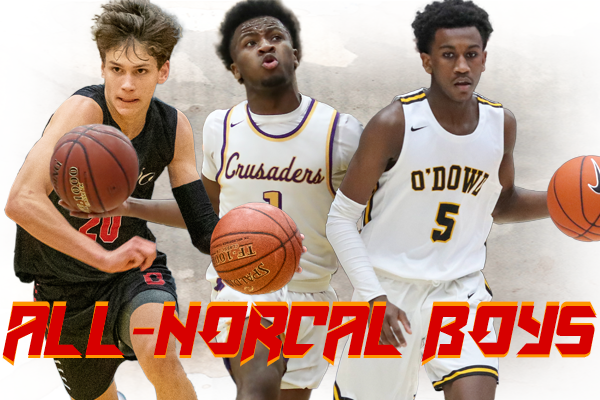 No State Champs Were Crowned In 2020, But Our All-NorCal Boys Basketball Teams Still Highlight Plenty Of Championship-Level Talent •

Meet the SportStars’ All-NorCal Boys Basketball teams from the 2019-20 season. Only five players can play on the floor at a time. And we stick to that rule. So here are the 15 players from our first, second and third teams. We follow that with a few honorable mentions.

HUSKIES HEARTBEAT: An electric player who would do whatever Sheldon needed on any given night, Brown led the NorCal Open finalists in assists and steals. He was second in blocks (1.1 per game) and third in overall rebounds. The Appalachian State signee also led the team in charges taken. He averaged 9.1 points per game for the Huskies and was named the Sacramento Bee’s Co-Player of the Year.

COUGAR CORNERSTONE: Considered one of the nation’s top 2022 recruits, Mahaney was the top player on a Cougars team which reached the state final for a second straight year. He averaged 19.4 points, 3.8 rebounds, 2.4 assists and slightly more than one steal a game. His strong outside shot combined with his ability to finish at the rim make him a nightmare perimeter matchup.

SHOWSTOPPER: The Sam Houston State-bound point guard led the Crusaders in both points (20.2 per game) and assists (3.2). He also added 3.2 rebounds per game. Monroe and his cousin Je’Lani Clark comprised the best backcourt in the Bay Area. Monroe, who could slash to the basket and also stick the 3, saved his best games for the best opponents. He scored 44 in a win over Campolindo.

SHAPE SHIFTER: The sharp-shooting guard was named Bay Area News Groups’ Bay Area Player of the Year after helping lead the Dragons to the NCS Open title and the NorCal Open final (the game was cancelled). His versatility showed as he could lead the Dragons in scoring one night and complement fellow standouts Monty Bowser or Jalen Lewis on other nights. He led the team with 16.5 points and 6.3 rebounds per game.

A COMPLETE LEADER: Roy stepped front and center into the alpha role vacated when former Dublin standout Robby Beasley transferred in the summer of 2019. The 6-foot-5 forward nearly doubled his scoring average from his junior season and led the Gaels (24-7) to within a point of the NorCal Open final. He averaged 17.8 points, 5.4 rebounds, 2.5 assists and 1.5 steals. He was the East Bay Athletic League MVP and the SportStars’ NorCal Player of the Year.

Our NorCal Player of the Year from a season ago. Injuries kept the Arizona State signee to just 17 games, but he still averaged 22 points and 8.8 rebounds for the NorCal Open Division finalists. In his final game, he scored 27 to lead the Huskies’ comeback win over Dublin.

The versatile Montana-bound guard averaged 23.3 points, 7.6 rebounds, 2.7 assists and 2.6 steals over 20 games. The Wildcats were 22-2 and ranked No. 4 in NorCal before Beasley suffered a season-ending torn meniscus a week before the playoffs.

Clark was named the Co-MVP of the West Catholic Athletic League after leading the Crusaders to a share of the regular season title. The Nevada-bound wing was a stat monster, averaging 15.8 points, 5 rebounds, 3 assists and 1.7 steals.

One of the best all-around players in the WCAL, the Pepperdine commit shared the league’s Co-MVP honors with Clark. Mitchell averaged 13.6 points, 6.2 rebounds, 4.4 assists and 1.8 steals a contest.

Silva will be the Sacramento area’s most coveted recruit this summer and into his final season with the Marauders. He averaged 18.5 points, 4.2 rebounds and 4.5 assists as a junior.

The Sacramento State-bound Hardee will graduate as the City of Fairfield’s all-time scorer with 1,903 points. This year he averaged 18.7 points, 9.1 rebounds and 5.4 assists.

Plenty of hype preceded his first year of high school ball, and Lewis delivered. He shined brightest in big games, like his 22-point, 10-rebound, four-block effort in the NCS Open final.

Wilburn wrapped up his four-year varsity career by averaging 14.3 points, 5.4 rebounds and 3.4 assists in leading the Cougars to a NorCal Div. II title.

NEXT SQUAD UP (Underclass Honorable Mentions)