Octavia Bond Fall Softball Hitting Camp!
Wanna learn hitting tips from some of the best local softball instructors? Come to The Fieldhouse and ex-Cal Bear player Octivia Bond's 3 week camp. "Hit with power and discipline!" This clinic will focus on hitting mechanics of loading, separation, driving/extending through the ball, and balance with various fun drills to have a more efficient and powerful swing! 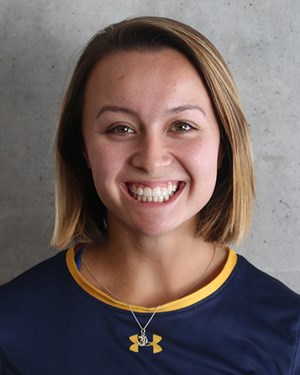 As a Redshirt Sophomore (2017):
Appeared in 31 games with three starts… Came in as pinch runner often scoring nine runs on the season in 11 at bats.

As a Redshirt Sophomore (2017):
Appeared in 31 games with three starts… Came in as pinch runner often scoring nine runs on the season in 11 at bats.

As a Redshirt Freshman (2016):
Earned Pac-12 All-Academic Honorable Mention...Appeared in 42 games (11 starts) in her first active season as a Golden Bear and hit .346 (9 for 26). Made a mark as one of Cal's primary pinch-runners throughout the season. And went 5 for 6 in steal attempts. Made first collegiate start against Texas Tech on Feb. 20 and went 2 for 2 to collect her first collegiate hit. Started twice in the last series of the regular season and went 2 for 3 in Cal's 5-3 win over Arizona. Started twice at designated player in the NCAA Regional. And went 1 for 3 with a run scored against Texas State.

As a Freshman (2015):
Redshirted to recover from shoulder surgery

High School:
Attended Northgate High School, where she was the starting shortstop for all four years. Played in the Diablo Valley Athletic League (DVAL), and coached by Harry Hendry. Varsity MVP all four years. North Coast Section Division I and II all-time leader in stolen bases. First Team All-League DVAL shortstop all four years. All-time leader in hits, triples, stolen bases, on base percentage and slugging percentage. Set multiple single-season records for Northgate. Helped Northgate to the playoffs her junior and senior year, ending a 12-year playoff drought for the school. 506 career batting average with 56 walks and 115 hits. Was also a junior Raiderette and participated in Women’s Choir. Finished senior year with a 4.0 grade point average. Served as Northgate’s conflict manager for her junior and senior year and was an assistant to the athletic director.