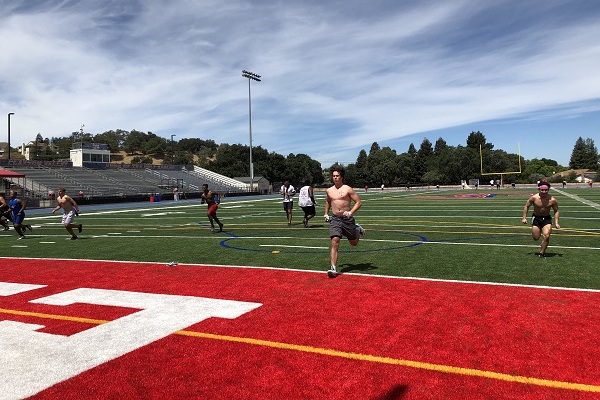 In A Notes-Style Column, Cal-Hi Sports’ Editor Writes On The CIF Facing Tough Calls On Fall Sports, And Looks At Black Lives Matter Protests Through A California HS Sports Lens •

High school sports can seem insignificant during turbulent times, but it does play a role in the many events of the world, nation and state since many of the leaders deciding what to do next have been shaped to varying degrees by their participation in them.

One of the best examples is California Governor Gavin Newsom, a former basketball and baseball player at Redwood-Larkspur. Former U.S. President Barack Obama famously was a sixth man on a state championship basketball team in Hawaii. Additionally, many Republican leaders have also been former high school athletes, including Bakersfield’s Kevin McCarthy. The current Minority Leader of the U.S. House of Representatives played football for the Drillers.

Here’s more random thoughts from all we’ve been through in recent months:

>> The outbreak of the Coronavirus pandemic in March was so much worse for spring sports athletes than those few from the winter who basically just missed playing in CIF state finals. Some schools in Northern California began football workouts on Monday, June 8. However, those are happening with strict guidelines. In many cases, there’s one coach working with a minimum of 10 players and no equipment (such as a ball). That obviously leaves a long way to go before full practices and games.

>> As of this writing, all options for the CIF and its sections seem to be on the table regarding fall sports. (CIF has since named July 20 as its deadline for an announcement.) It might be a good idea to follow the developments in some of the larger school districts. Those districts will set the bar. We were shocked a few days into the mid-March shutdown when the William S. Hart Unified High School District in northern L.A. County declared spring sports to be over. It turns out that every other district followed. By April 3 the CIF had no choice but to cancel everything for the rest of the school year.

>> Spring sports athletes have all suffered with seniors also not getting to experience those things everyone previously took for granted. A special shout out should go to those Class of 2020 seniors at Paradise High. Particularly the athletes from the 2018 football team forced to drop out of the section playoffs after their town was destroyed, and then had their senior spring sports wrecked by the pandemic. Based on published rosters, the football-baseball seniors on those teams were Owen Kopka, Josh Alvies and Tyler Hooks.

>> As the state was starting to open back up, the entire nation was smacked in the gut by the death of George Floyd at the hands of Minneapolis police officers. At Cal-Hi Sports, we stand with the peaceful protesters and support police department reforms. Racial inequality from a high school sports perspective can be addressed by the inclusion of more people of color as prominent coaches and officials. That’s why it was heartening to see Bellarmine Prep-San Jose hire 32-year-old Jalal Beauchman to replace retiring longtime football coach Mike Janda. This is no way to suggest that he’s not qualified. Beauchman, a former leading receiver at San Jose State, coached the Bells freshman team last fall to a 9-0 record.

Of the 55 teams that won CIF section football titles last season, African-Americans coached just four of them. The two in NorCal were Michael Peters of McClymonds-Oakland and Anthony Ghoston from San Joaquin Memorial-Fresno. Plus, of all the CIF sections (other than San Francisco and Oakland), there has never been an African-American commissioner. There’s also never been a black CIF state executive director. We have to start seeing people in the pipeline to step into these roles as others retire.

Michael Peters of McClymonds-Oakland was one of just four minority coaches to win a CIF section title in 2019. (Phillip Walton photo)

>> It doesn’t seem likely that any other CIF sections will go to a football playoff format like the one that the North Coast Section is going to this season. That’s the one in which the loser of the NCS Open Division championship will play the NCS Div. I champion for a NorCal regional playoff spot. With just a four-team NCS Open bracket, the section had the scheduling flexibility to benefit the runner-up.

Everyone in the state knows that in the NCS, where De La Salle-Concord has been ruling since 1992, it’s an extremely unique situation. Everyone also knows that if the Southern Section did something similar that the loser of the annual St. John Bosco-Mater Dei final would just destroy any other teams it would face in a similar scenario. What would be the point of that? Those two teams seem likely to play each other twice again in 2020 with the winner of the Southern Section Div. 1 final going on to probably play De La Salle as a big favorite once again.

>> Finally, I want to end this column with a note of congratulations to publisher Mike Calamusa and editor Chace Bryson for the 10th anniversary issue of SportStars. There are a few other regional high school sports magazines we’ve seen over these 10 years (not just in California). SportStars is by far the best for its graphics, layout and tone. It’s quite difficult to have a high school sports magazine these last 10 years, but Mike and Chace have done it. Keep ‘em coming.